LORDSBURG, N.M. — More than a year later, new details are emerging in the investigation into the death of New Mexico State Police Officer Darian Jarrott.

On Feb. 4, 2021, breakdowns in communication led to a suspect shooting and killing Officer Jarrott, a father of three with a fiancée and fourth child on the way.

Now, family members are speaking in front of a camera for the first time, saying they’re still waiting for someone to take responsibility.

KOB 4’s Tommy Lopez went to Lordsburg to meet with them and they told him moving on has been difficult. 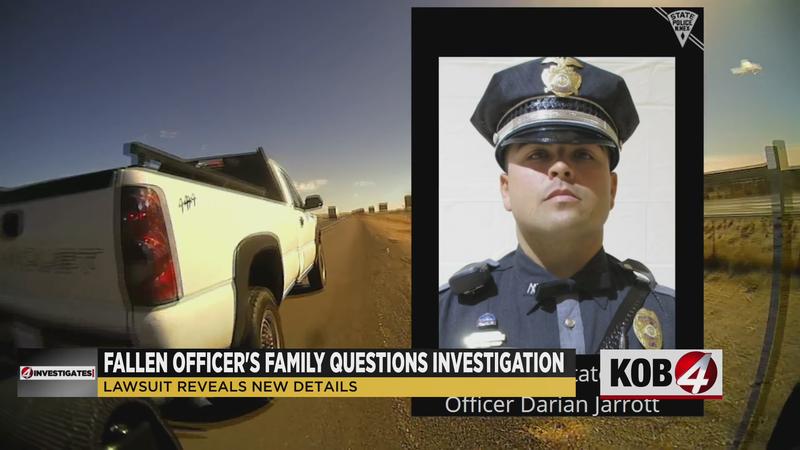 “I just come and talk to him,” he said. “It probably has to be the worst day of my life. It’s like they ripped out my heart and my soul all at once.”

Darian’s parents said that day changed all their lives forever.

Darian’s family feels that his children will be his legacy. He had three kids at the time of his death.

“He was the greatest dad ever,” his 9-year-old daughter Ariella said.

He never got to meet his youngest daughter, Darian Riley Jarrott, whom his fiancée, Alycia Jarrott, gave birth to this past summer, after taking Darian’s last name as her own.

“Since then, it’s hard. I have to see all of my daughter’s milestones that he’s missing out on,” Alycia said.

At the Lordsburg house the couple shared, Darian’s clothes and boots are still where he left them.

Alycia remembers helping him get ready that morning, then hearing her worst fears had come true.

“Darian didn’t make it. He never left,” she said, recalling when she got the news. “He’s, you know, he’s gone.”

It was a day that shocked the state of New Mexico.

Officer Jarrott’s body and dash cameras show his encounter with a dangerous suspect, Omar Cueva, on I-10 in Deming.

Jarrott is seen pulling him over, correctly identifying his vehicle from a BOLO, or, “be on the lookout” alert.

After introducing himself to Cueva, the suspect tells Jarrott that he has a gun.

“Do you mind if I take it off you for my safety?” Jarrott asked.

Seconds later, Cueva gets out and shoots Jarrott.

Cueva then led police on a high-speed chase, and officers later shot and killed him in Las Cruces.

Officer Jarrott’s family believes he never should have been in that position.

The internal New Mexico State Police investigation into his death reveals federal agents with Homeland Security were targeting Cueva in an undercover drug sting that day. In fact, agents were watching just a couple hundred yards away when he shot Jarrott.

So why didn’t Officer Jarrott know what he was walking into?

That’s the question behind a wrongful death lawsuit filed by Gabriella Jarrott – Jarrott’s wife and mother of two of his four children.

4 Investigates reviewed hundreds of pages of interview transcripts from the lawsuit and found they reveal disagreements among state police and that NMSP and federal agents are still pointing fingers.

From the beginning, NMSP investigators had questions for a specific supervisor, State Police Sgt. Mark Madrid – about what he knew of the undercover drug buy.

“I don’t even know who the dude is,” Sgt. Madrid told NMSP investigators last year.

However, a supervisor with the feds said agents had briefed Sgt. Madrid before the stop.

“Everybody knew this guy was dangerous. It was going to be a high-risk kind of stop,” Homeland Security Agent Hector Huerta said last year in an interview with NMSP investigators.

Now, in a sworn interview, new details have been revealed as Bregman questioned Madrid about what he asked the federal supervisor regarding Cueva.

“Did you ask him about how dangerous he was?” Bregman asked.

In another sworn interview, State Police Officer Daniel Soliz blamed Madrid – a superior officer – for not asking the feds “the necessary questions.”

Even the state police officer leading the agency’s own investigation didn’t seem to have a clear picture of what happened.

79 times in the deposition, the officer said he either didn’t know or wasn’t sure about an aspect of the case. Still, he called the investigation “thorough” and “complete,” but a state police spokesperson told KOB 4 it’s ongoing.

Back in Lordsburg, there aren’t any answers for Officer Jarrott’s family.

“Looking back, I have a lot of questions,” his fiancée Alycia said. “The biggest question I have is, why was my fiancé alone?”

As they try to heal, his family wants people to remember his sacrifice.