4 Investigates: Review of expenses reveals governor spending most of her discretionary fund on groceries

ALBUQUERQUE, N.M. — A review of six months’ worth of invoices, receipts and expense reports of the governor’s contingency fund reveals a vast majority of it is spent for food for the Governor’s Residence. The timeframe of our review, July 1st through December 31, 2020, covers a time period when Governor Michelle Lujan Grisham restricted capacity of grocery stores, urged New Mexicans to limit time out of their homes and restricted business operations through a series of emergency public health orders.

The governor’s contingency fund is paid for by taxpayers and appropriated by the NM Legislature for the governor to spend on functions, events or items to promote New Mexico. The review conducted by the KOB 4 Investigates Team shows the governor’s contingency fund was used to pay for $6,545 in groceries, averaging out to about $1,091 each month. According to receipts made public through an Inspection of Public Records Act request, the items include anything from laundry detergent to Wagyu beef, tuna steaks, top sirloin and hundreds of dollars in alcohol purchases.

“Who ate all that food? Who’s that food for?” KOB 4 Investigator Chris Ramirez asked. 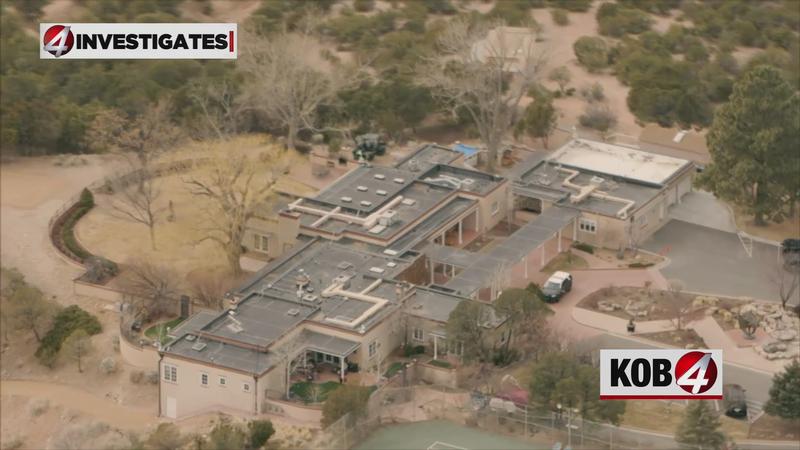 “There are still meetings with cabinet and staff that are distanced small groups,” Stelnicki said. “They are sporadic, but they last a long time and so there’s food at those meetings often prepared. There are people at the residence who are all masked. They include State Police security detail, maintenance and custodial/housekeeping staff.”

Stelnicki added members of the governor’s cabinet and other staff members spent long hours inside the Governor’s Residence in Santa Fe working on the budget or preparing pitches for the upcoming legislative session. During these meetings, they were fed gourmet meals, according to Stelnicki.

While the governor allowed an unknown number of people into her home, she discouraged New Mexicans from letting people into theirs.

In a November 2020 virtual press conference just before Thanksgiving, Governor Lujan Grisham told her constituents, “do everything in your power not to mix households. I know that is asking a lot because that is how we celebrate– by bringing multiple households together. But, this is ripe for spreading this virus. Mixing means if you are coming into contact with non-household members, even if it’s small, even if its outdoors. It isn’t going to be enough because you have to take masks off to eat.”

And despite the governor’s requests to limit trips outside the home, receipts reveal a staffer working inside the Governor’s Residence often went to the grocery store multiple times a day. For example, on December 2, 2020, that staffer went to Kaunes in Santa Fe and spent $24.95, then to Trader Joe’s and spent $93.76 and then later in the day went to Market Street and spent $143.59. Then the next day, she went to Smith’s and spent $117 on groceries.

“Absolutely hypocrisy reigns in Santa Fe,” said Rep. Jim Townsend, R- House Minority Leader. “And I would tell you anytime a legislator, a governor or a Lt. Governor tells you – you cannot have Christmas at your house– but they are serving wagyu beef in the state mansion? That’s hypocrisy.”

The receipts we reviewed show about $350 in alcohol purchase for beer, Crown Royal, an assortment of wines and tequila. According to Stelnicki, these alcohol purchases were made over a period of time for a future staff party after the COVID-19 pandemic ends.

“The staff at the residence have, I think, been guilty of optimism, that with declining case numbers,” Stelnicki said. “We might get to a place where there could be a safe gathering. I think everyone has been guilty of that from time to time over the course of COVID. And so some of those purchases have been made, whether it’s planning for or hoping for a different kind of gathering with legislators or partners, whoever it might be. That hasn’t happened. So those purchases are sort of just there. And they’ll be used after COVID. Hopefully, soon.”

Rep. Patty Lundstrom, D-Gallup, is the Vice Chair of the Legislative Finance Committee and the Chair of the House Appropriations Committee. Rep. Lundstrom stated taxpayers should not be on the hook for paying for alcohol unless it’s for an event that benefits or promotes the state. It’s unclear how the governor’s post-COVID staff party will benefit New Mexico.

“My feeling about it is, is that there are certain things that should not be paid for by the taxpayer. I did say that I do not believe that alcohol expenses are one of those things unless it’s an official event,” Rep. Lundstrom told KOB.

The receipts reveal the fund paid out nearly $800 to clean rugs inside the governor’s residence and treat animal stains. One receipt from PetsMart shows the fund was used to pay for a new doggy door.

Stelnicki confirmed the governor brought two new dogs into the Governor’s Residence, but wouldn’t say if they were puppies. Stelnicki stated he believes taxpayers are in deed responsible for the messes created by the governor’s dogs when those messes are on the public side of the residence. It’s important to note that the Governor’s Residence has been closed to the public since March 2020.

A Fund with a Political History

The history of the governor’s contingency fund is a political one. Every governor in modern time has had a contingency fund to use to travel to meet with other political leaders or CEOs of prospective businesses. Governors have used the fund to host dignitaries or put on special events at the Governor’s Residence or around the state.

In December 2015, Gov. Susana Martinez used nearly $8,000 of the fund to host a holiday party for her staff at the Eldorado Hotel in Santa Fe that ended in an infamous late night pizza party. After hotel guests complained about the loud noise in Gov. Martinez’s room, the governor called 911 demanding to know who complained about her.

“We are eating pizza and drinking cokes,” Gov. Martinez told the dispatcher.

Reporters at that time learned governors were not required to keep detailed receipts of how the contingency fund is spent. In 2018, the NM Legislature passed a bill requiring detailed expense reports for the governor’s fund. Gov. Martinez signed the bill, knowing the reporting requirements would not go into effect during her time as governor. Gov. Michelle Lujan Grisham is the first governor mandated by state law to disclose each expenditure in detail.

The law also states, “money in the fund shall not be used to pay or supplement the salary of the governor or any state employee.” Governors have discretion how the fund is used, but the truth is the law does not establish whether or not the expenditures we reviewed are appropriate or not.

What’s different is the level of transparency and now New Mexicans can make informed decisions whether they are ok with their tax dollars spent this way or not.