ALBUQUERQUE, N.M. — While hundreds of New Mexicans received unsolicited seeds from a mysterious Chinese address, federal investigators are still uncertain about the motivation behind the shipments.

“It was concerning to me because I thought how did they get my name? My address? Everything, um… what kind of information of mine is floating out there for them to just handpick my name and send them off?,” said Angela Alonen, who received a package of unsolicited seeds in the mail.

Beginning in early 2020, the New Mexico Department of Agriculture served as a collection point for unsolicited seeds from New Mexicans. The department then sent all of the seeds, packaging and other evidence to the USDA which was the agency leading the investigation.

“There was a full range of seeds – some were flower seeds, some were herbs, some were fruit,” said Katie Laney of the New Mexico Department of Agriculture based in Las Cruces. 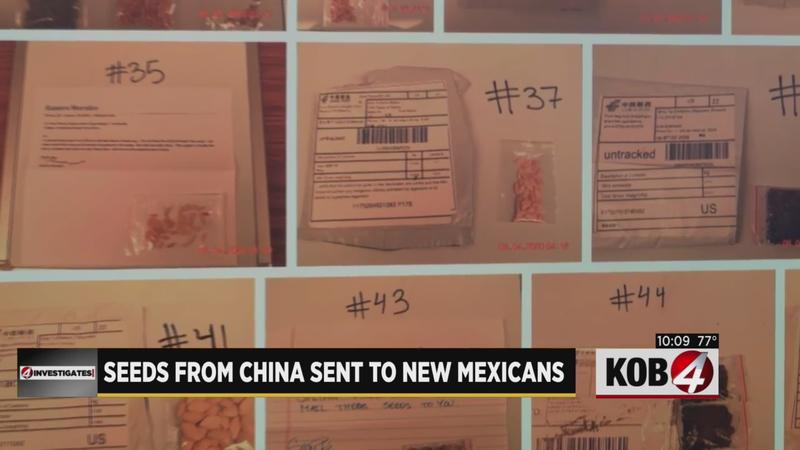 “There were just a couple [seeds] that were identified as noxious weeds at the federal level,” said Laney.

Many of the seeds collected by the state were found to have been improperly labeled.

“That in itself is a violation of the New Mexico Seed Law — seeds have to be correctly labeled,” said Laney, adding: “The bigger concern is because [the seeds] were unknown, they could have been harmful weed seeds that were invasive, they could have harbored some sort of biological nuisance or pathogen.”

Federal investigators with the USDA found "most of the seed shipments were illegal because they entered the United States without a permit."

While the motivation for the mysterious seed shipments remains unclear, the USDA found no evidence of any malicious intent to harm domestic crops.

According to the USDA, the unsolicited seed shipments may have been part of a “brushing scam” where sellers ship out inexpensive items to increase transaction totals, which in turn boosts their ratings on online shopping websites.

State and federal authorities continue to urge anyone who may come across unsolicited or unmarked seeds in the mail to not plant them or throw them away, instead to report them and turn them in so they may be properly disposed.