ALBUQUERQUE, N.M. – The 4 Investigates Team reviewed more than two years’ worth of ART bus crash reports and videos and concluded that 92% of the collisions occur because motorists are either trying to make unlawful left-hand turns or illegal U-turns on Central Avenue.

Crash data overwhelmingly reveals that drivers along Central Avenue are either intentionally breaking traffic laws or are confused by the lanes of traffic parallel to the ART lanes. Either way, dozens have been injured, private vehicles have been smashed by buses and the City of Albuquerque is constantly repairing dents and issues caused by these frequent collisions.

“What we’ve recognized, along with your findings, is that folks tend to take that left-hand turn not realizing there is a bus lane right next to them,” said Bobby Sisneros, a deputy director with the city’s transit department.

With so many motorists experiencing the same problem along Central, many continue to question if the city still has inherent traffic design problems with the ART program.

Sisneros explained that the city has installed pin curbs separating the eastbound lanes of traffic from the westbound lanes. Those pin curbs are high enough to discourage those left-hand turns. 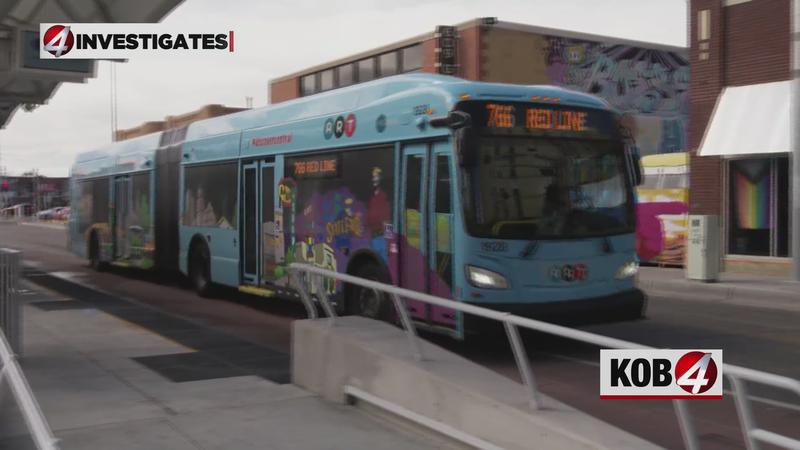 Still, the red paint is also inconsistent. Chopper 4 recently flew over the ART route and, from an aerial perspective, we can see the ART lanes are painted red near Central and Yale. By the time a driver hits the next block west toward University Avenue, the red paint fades and then disappears, creating yet another patchwork of inconsistent traffic signals for drivers.

Data KOB 4 reviewed shows out-of-state drivers often collide with buses. Sisneros explained the city launched an informational campaign to help understand the rules of the road, but it’s unknown how out-of-state tourists would have access to that informational material.

It is the responsibility of the City of Albuquerque to create traffic designs that are easy for drivers to understand, with signage and markings that make sense to the masses.

“We agree, totally,” Sisneros said. “We’ll continue to mark our roads, mark our lanes, continue to put up signage and ensure we have that set up properly – and we’ll continue to ask the community to follow the rules of the road.”

The Transit Department reviews crash data as well and has made changes based on what the data reveals – but Sisneros acknowledged the work is not yet done.

“The mayor called this project a lemon and we’re making lemonade out of the lemon," Sisneros said. "This is exactly what we’re trying to do to get it right.”