ALBUQUERQUE, N.M. — Over the years, the 4 Investigates team has exposed both problem officers and problems with the process to keep those officers off the streets.

Lawmakers address some of those calls for change past legislative session – but what could have been perhaps the biggest tool never made it out of the Roundhouse.

Laura Schauer Ives represents the family of 25-year-old Oscar Najera in a wrongful-death lawsuit from a police shooting in New Mexico last June. She began to do some research on one of the deputies who shot Najera – Ricardo Delgado.

"The shooting was so shocking, and the deputies were so clearly untrained and excited and apparently not suited for the work that they were doing," Schauer Ives said. "We definitely wanted to dive into their personnel files and their history immediately."

That’s when she found another allegation of excessive force involving Delgado – and a video of him yanking a handcuffed woman out of his car after she kicked him. He then kneels on her neck and breaks her nose.

The incident was reported to the New Mexico Law Enforcement Academy Board, the only authority that can revoke or suspend an officer’s certification. However, it was ultimately dismissed.

Costello: "Does this raise the issue of whether or not these cases are being adequately reviewed?"

Schauer Ives: "That absolutely raises very serious questions about the LEA Board and whether or not they are doing the work we expect them to do as New Mexicans." 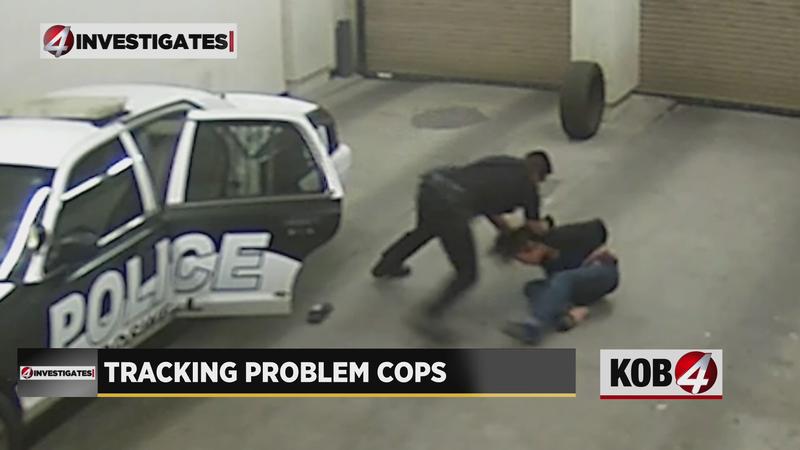 Troubled officers in New Mexico have no trouble getting other jobs with other departments. Whether backlog or board discretion is to blame, Attorney General Hector Balderas chairs the LEA Board and points the finger at the state Legislature.

"The fact that they’ve been asleep at the wheel and have not provided that level of funding and the right lawful authorities to bring accountability is a black eye for Republicans and Democrats," Balderas said.

This year, lawmakers passed a bill that separates the board – one part to handle officer training, and another part to oversee certification and misconduct. The board would also have different members.

"Before we had the police policing the police," Sen. Joseph Cervantes, D-Las Cruces, said. "Here, we’re going to have people who represent the courts – prosecutors, public defenders and average New Mexico citizens."

Cervantes worked on the bill, which also was expected to create "a database to coordinate the sharing of information among state, local and federal law enforcement agencies concerning instances of excessive use of force related to law enforcement matters."

But in the final hours of the Legislature’s last night, an amendment eliminated the proposed database to track troubled cops.

"We wanted to keep a central repository or database for those officers," Cervantes said. "The goal here is to make sure when those officers try to seek employment elsewhere in the state of New Mexico that the potential employer would have a full understanding of what that background would be."

Costello: "What happened? Why didn’t that go through?"

Cervantes: "The proposed amendment was debated and discussed on the Senate floor. The request was really part of the role of the governor and the process, the legislative process."

A spokesperson for the state’s Department of Public Safety told KOB 4 the timeline was too aggressive to create the database – although it would have had more than a year to create it. The governor’s office echoed that.

The attorney general, on the other hand, thinks the database should’ve stayed in the legislation.

"I mean, it’s embarrassing that I can get food reviews on my phone quicker than I can find out information about bad officers," Balderas said.

The New Mexico Law Enforcement Academy changed directors earlier this year. The changes to the board described in this story go into effect on July 1 of next year.