ALBUQUERQUE, N.M. — New Mexico invested some big bucks in an effort to get New Mexicans back to work. The state was offering back-to-work incentives to those who got a job in July.

So far, they’ve paid out $2.9 million. So was the program a success?

Some businesses say reopening in New Mexico has been a slow process, further delayed by the lack of employees. The unemployment rate in New Mexico is still among the nation’s highest.

In an effort to fix that, state officials offered back-to-work incentives for those out of a job. It started at a $1,000 the week of July 4. It went down to $400 the last week of July.

“At the end of the day we’re putting resources in the hands of New Mexicans for the purpose of making the purchases that are essential to get them back to work and that’s going to help those who are working in those businesses that they’re spending in,” said Ricky Serna, acting secretary of the Department of Workforce Solutions. “It’s certainly going to help big picture to get those claimants off transitional benefits and back to work.”

The Department of Workforce Solutions is finally getting those results back. As of now, 3,982 New Mexicans qualified for that money. That’s just over 5% of the 72,366 New Mexicans who were on unemployment in July.

“We’re hopeful that the impact to those who were eligible was meaningful and certainly was a step or helped take a step to getting back to work sooner,” Serna said.

During that period around 1,000 New Mexicans went back to work each week. The number of people eligible for the incentive could increase over the next few months as they sort out claims or appeals.

As of now, the state has spent nearly $3 million in federal COVID-19 relief money on that back-to-work incentive. 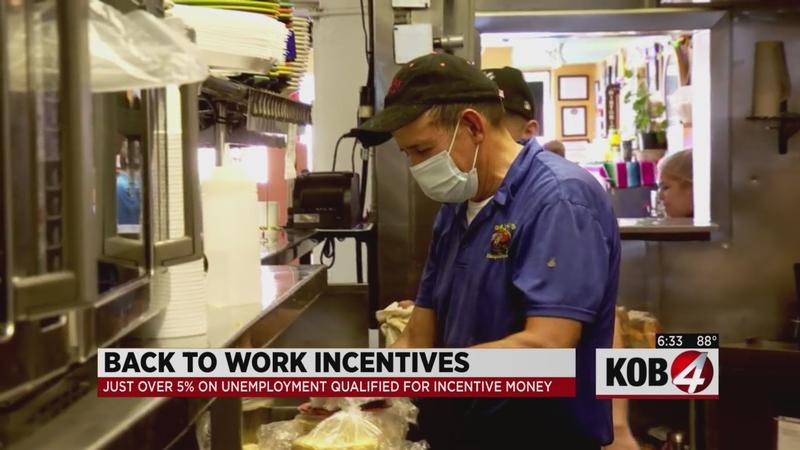