ALBUQUERQUE, N.M. – An Albuquerque used car dealership has fallen victim to the city’s crime crisis, and the owner says it was an elaborate scheme.

Dec. 18th was an unusual start to a typical work day for Steve Henry- owner of Exodus Auto Sales.

“About half the cars are gone and I realize we have been hit,” said Henry.

Henry says the thieves got in through a hole in the roof, after getting through the back door was unsuccessful.

“They shut the internet down, they shut the surveillance equipment down. They definitely knew what they were doing,” Henry said.

He says the crooks also took surveillance equipment along with the footage. As for the cameras-they were covered with sticky notes.

But that’s not all, about 8 cars were stolen and as of Dec. 28th two of them have been recovered.

While the thieves might have taken some cars, they left behind some clues inside one of the cars recovered in a residential area.

“Inside the sleeve of that door, they left behind a receipt to McDonald’s. They had breakfast just after the heist at 8:18 a.m.,” said Henry.

In the surveillance footage provided by the McDonald’s on Eubank and Candelaria, a white car is seen going to the drive thru with a quick glance of the driver.

While some cars are still missing – Henry says it’s not stopping him from the good he does for the community. Henry runs his own cooking show at the dealership- through there he gives away cars. And the theft did not stop that from happening.

“Thank God they left the studio intact, we decided to go ahead with the show and deliver the Jeep to Phoenix that very same weekend even though we were bludgeoned with eight missing cars.”

Henry says he hopes the thieves are caught and plans to bring more security measures to his business. 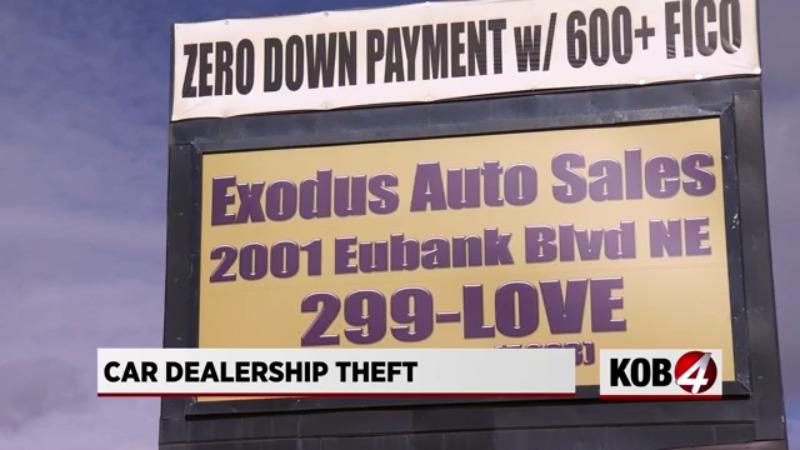