ALBUQUERQUE, N.M. – Middle and high school coaches in New Mexico don’t do the job for the money. However, many of them in Albuquerque are not getting paid nearly as much as their colleagues in other school districts.

The West Mesa girls basketball players spend a lot of time with their head coach, Manny Otero, and he’s led this team for 14 years. But all that passion doesn’t pay all that well.

"It was at first kind of surprising to know that other coaches in the same line of work make a little more money – a lot more money than we do, and it’s kind of alarming to know that,” said Otero. “We’re two-and-a-half times underpaid versus everyone else in the state of New Mexico right now."

In many cases, what APS pays doesn’t even compete.

"We’re the largest school district in New Mexico, and I’m not understanding why we couldn’t earn the same amount of money," Otero said. "It’s hard to make sense of it."

KOB 4 got data from across the state. For some sports, APS pays half of what Rio Rancho, Roswell, and Carlsbad pay their coaches. For sports like football and basketball, about a fourth or a fifth of what Hobbs pays.

For example, head high school basketball coaches in Hobbs make at least $20,000 – while the same job, with the same experience, in Albuquerque will get you around $4,500.

"We want to be along the same lines. We’re not asking for any more than anybody else. We just want the same pay as every other coach in the state make," said Otero.

Multiple athletic directors told KOB 4 APS coaches haven’t had a raise in about 15 years. They say some people quit because of it and they sometimes struggle to get good coaches. They said this is about much more than sports.

Ellen Bernstein, head of the Albuquerque teachers union, said that negotiations with APS explained what it would take to get a win – more funding from state lawmakers.

"It’s been a real problem that as salaries have increased over time, we haven’t had the discretionary money from Santa Fe into the APS budget,” said Bernstein. “So we can increase what we pay for all the other things everybody does during the year in addition to teaching."

KOB 4 didn’t hear back from an APS spokesperson when the station asked them for a comment last week. 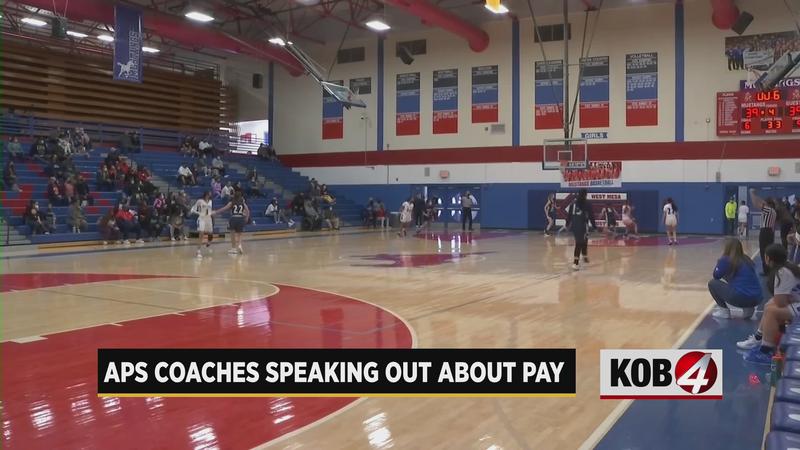