‘A horrendous day’: Student killed in shooting at Albuquerque middle school, another student in custody

ALBUQUERQUE, N.M. – A student was shot and killed by another student during lunchtime on Washington Middle School’s campus Friday afternoon.

In an emailed statement, Albuquerque Police Department Chief Harold Medina revealed that the boy was actually trying to de-escalate a violent situation between classmates when he died.

"Sadly, a child lost his life because a classmate brought a gun to school. The boy who lost his life is also a hero," Medina said.

According to a witness at the scene, six shots were fired. Police said the shooting happened in a grassy area of campus near the track. An APS police officer who was outside at the time was able to take the suspect into custody.

Students ran into classrooms and hid underneath their desks when the shots rang out. The school was put on lockdown, and later the students were dismissed early. 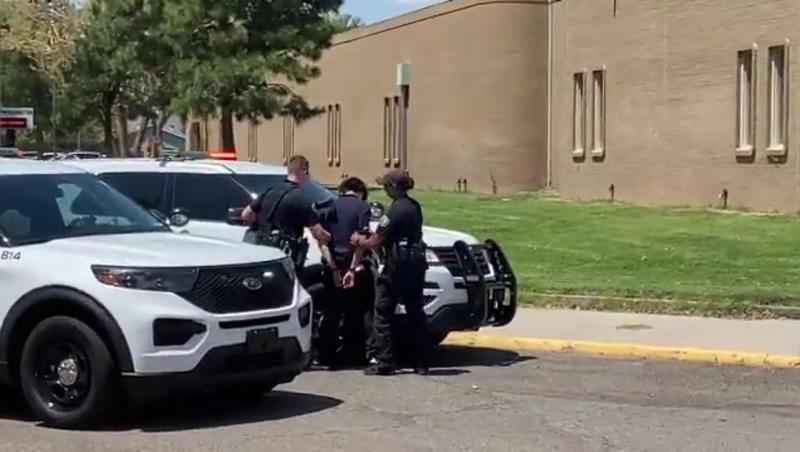 Police said both the victim and suspect are around 13 years old.

An eighth grader at the middle school told KOB 4 it was his new friend that got shot. He said an earlier fight led up to the shooting.

This shooting marks the city’s second homicide within 24 hours and the city’s 80th homicide this year, matching the record number of homicides APD investigated in 2019.

APS officials said class will not be held at Washington Middle School Monday, but grief counselors will be at the school from 10 a.m. to noon. Parents will need to accompany students and "remain with them the whole time."

Grief counselors will remain on campus throughout the week. Students are expected to return to class Tuesday.

According to APS, the school will also have an increased police presence.

“Our officers put themselves in danger to keep people safe. Today was no exception as a school police officer ran toward danger to disarm a shooter and treat the victim who had just been shot. She may have saved other lives. Sadly, a child lost his life because a classmate brought a gun to school. The boy who lost his life is also a hero. He stood up for a friend and tried to de-escalate a violent confrontation between classmates. This incident is a tragedy that has shaken our community.

It is also another example of gun violence that is victimizing families around the nation. Just last night, a violent offender shot a man at a sports bar in Northeast Albuquerque. The community support for Lawrence Anzures speaks volumes about his character and the tragic loss experienced by his family and friends. Our detectives are working hard to solve this crime and bring justice for Lawrence’s family.”

“This is a horrendous day for New Mexico. Today’s tragic event at Washington Middle School in Albuquerque means the terrible scourge of school violence has landed on our doorstep. While many details are still unknown, we do know that shots were fired, that a child is dead, and that someone is in custody. We can only imagine the terror felt by students, teachers and staff as they took cover in a place where they should feel safe. We can only imagine the terror felt by families rushing to pick up their children, fearing the worst. And the senseless and violent death of a child in our protection is, indeed, the worst. We share in your grief and pain as we once again are called upon to reflect on our failure — as adults and as a society — to protect and preserve the lives and health of our children. We are reaching out to offer our assistance to Principal Angela Rodriguez and to Superintendent Scott Elder.”