ALBUQUERQUE, N.M. – AAPI community members say they are tired and frankly terrified after the second homicide in less than a month where a woman of Chinese descent was shot and killed at a massage business.

Police are seeking the public’s help in finding the man who shot and killed a woman at Canna Spa Massage, near Coors and Fortuna, late Tuesday night. The homicide comes less than a month after Sihui Fang was also found dead inside her business.

According to the Albuquerque-based Asian Business Collaborative – a group that works with hundreds of Asian-owned businesses in New Mexico – robberies in these massage spas have been happening over the last year – with even more cases since Christmas.

"Thieves are getting sneakier with the way that they’re um coming into the business – meaning that they’re filing an appointment as if they’re just a regular client of the massage parlor," said Kristelle Siarza, of the Asian Business Collaborative, "and then they’re committing the crime as they come in for their appointment. So massage owners are starting to be very skeptical."

The victim in Tuesday night’s homicide has not been identified. APD says it was a delayed call and they believe the incident happened a while before officers were notified. 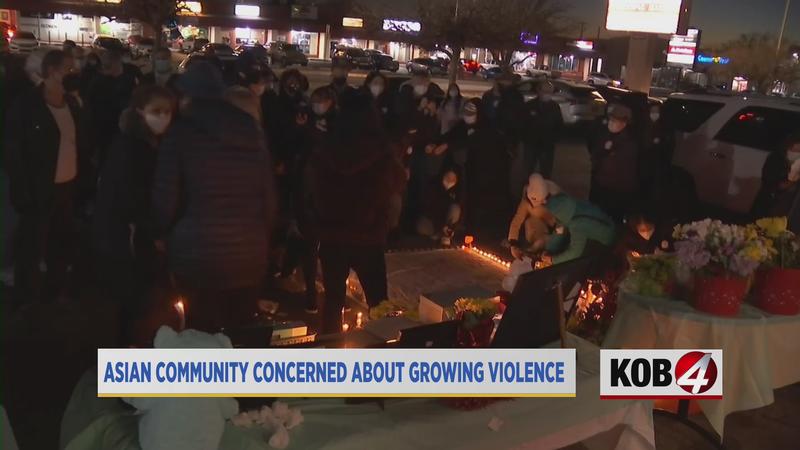 Chief Harold Medina told KOB 4 his department is looking into crime patterns at these locations to try and help these businesses prevent these crimes – but a lot of the work is going to come down to building trust.

"I don’t care about immigration status, I don’t care if you have a business license. If you’re the victim of violent crime, please reach out to our departments," Chief Medina stated. " We want to work with you to solve that and that’s the message they have to hear from me at the top. This is what I’ve committed to the Asian community and we’ll continue to work as hard as possible."

Three weeks ago, family and friends held a vigil for Sihui Fang where one woman stated, in Chinese, "We are taxpayers who follow the law. Why are we not being protected?"

While the suspects in Fang’s death have been charged, a case is still active involving a man who, APD said, assaulted another massage therapist over a mask and yelled racial slurs during the attack almost a year ago. The man was driving a car with the Florida license plate number "CLW4172".

The victim tells us she spends every day worried about what could happen.

"Many of the Asian business owners are starting to lose trust in the safety system and that’s not what we want for them," Sarza stated. "We want to help Asian-owned businesses know that their community can band together to help them in any way shape or form."

Although the recent crime wave has affected massage businesses, many other AAPI-owned businesses – including restaurants and nail salons – are worried about if they’re next.