ALBUQUERQUE, N.M. — In Albuquerque, there are different rules for the justice system than anywhere else in New Mexico.

After an arrest, prosecutors have the choice to initiate a case. But, after a case begins, and before it gets to trial, there is the discovery process where both sides gather and examine evidence. That’s where Case Management Order (CMO) changes the game.

The Case Management Order operates kind of like a shot clock in basketball. When a case is initiated, the clock starts, and there are all sorts of deadlines for prosecutors and the defense.

However, some prosecutors say there is some gamemanship at play – in trying to get the other side to run out the clock.

For example, there’s a shot clock to complete pretrial witness interviews. If they cannot complete all the interviews of all the witnesses before time runs out, oftentimes the case will be dismissed. 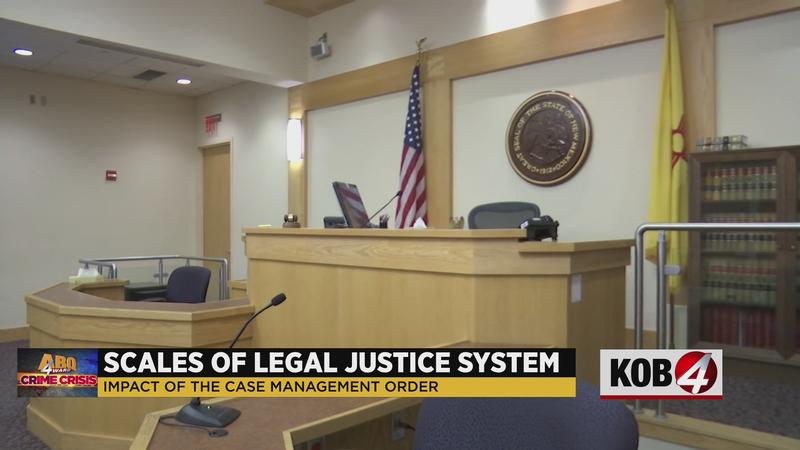 "It’s not even getting to the merits of the case – it’s can we pull off this logistical test?" said Adolfo Mendez, a policy analyst for the Bernalillo County District Attorney’s Office.

The CMO – the shot clock in this analogy – was implemented as apilot program in 2015.

For years, the Bernalillo County jail was too full. People accused of crimes sat in jail for months – or years – while their cases sat on the shelf.

"We don’t have people in jail in the same way, that’s true," Mendez said. "It has presented other challenges.

"We end up in a situation where there are lots of pretrial witness interviews requested. That may be for minor witnesses, and if those don’t happen within the timeline, the case is dismissed," Mendez said.

Ryan Laughlin: Are there violent offenders that are slipping through the cracks with the CMO order – and getting cases dismissed?

Adolfo Mendez: It does happen, yes.

Mendez points to cases like Abel Montelongo who was indicted in 2019 for attacking someone with a knife. The shot clock started and the district attorney’s office attempted to line up the pretrial interviews. Court documents show prosecutors were unable to reach anyone – including the police officers involved in the arrest – before time ran out. The district attorney had no choice but to dismiss the case.

While the district attorney’s office could not say how many cases have been dismissed before time runs out – they did say there are a lot of interviews prosecutors are trying to schedule.

Data reveals each attorney in the major crimes unit averages about 24 interviews a month. There are 24 attorneys, which equals close to 7,000 pretrial interviews every year just for this one unit.

As for Montelongo, he was arrested again in 2021 – accused of striking a woman with a machete.

Ryan Laughlin: So is this contributing to our crime crisis?

Adolfo Mendez: I think anytime we have cases that are not being resolved based on the strength of a case and their merits, of like, did this person commit this act? Then it does not help our crime crisis situation.

However, Jennifer Barela, a public defender in the 2nd Judicial District, says the burden is supposed to be on the prosecutors.

"Our Constitution and our rules give our citizens, the residents of New Mexico, much more rights," Barela said.

Ryan Laughlin: What would you say to the criticism that the CMO has tipped the scales too far in favor of defendants and because you represent defendants you would want to defend the CMO rule?

Jennifer Barela: I don’t think it’s tipped too far, I think it’s probably evened it out. Sometimes they take pleas that they shouldn’t take, just to get out of jail. So I would say that tipped it toward the state, right? Now I would say, it’s just more even.

Mary Cormack-Altwies used to be a defense attorney in Bernalillo County, working under the CMO shot clock.

"As a defense attorney, I was like, great! 50% of my cases are off my caseload! I’m never going to complain about that, if my job is suddenly made easier," Cormack-Altwies said. "But, that doesn’t mean that system is actually working better."

However, now she is the district attorney in Santa Fe.

"I believe if the CMO came to Santa Fe and it was imposed on us, like it was on Albuquerque, we would be in massive trouble," Cormack-Altwies said. "I certainly think the CMO has led to some more gamesmanship than prior to the CMO – or a different kind. And now the penalties are so much harsher on the state."

Cormack-Altwies said the CMO – ordered by the New Mexico Supreme Court – is, in part, the result of justices designing rules without having the experience of dealing with massive amounts of criminal cases.

"If the CMO is to stay in place, it needs to be reviewed by people that actually practice large dockets in criminal courts," Cormack-Altwies said.

Prosecutors said language adding flexibility could improve the CMO. Defense attorneys said the CMO should be implemented across the state. Then District Attorney Cormack-Altwies said improving the system could benefit all.

"If I had a client who had a serious drug addiction and that was leading him or her to break into cars, break into houses – that person needs to be A) held accountable, but B) they need help! Whether that’s being on probation and having that kind of accountability, whether that means going to inpatient treatment and having that kind of accountabillity," Cormack-Altwies said. "And when they don’t get that, then they just keep coming back to me."

At this point, it doesn’t appear the New Mexico Supreme Court is changing the CMO – leaving many to question how those scales of justice are tipped.

According to the Bernalillo County District Attorney’s Office, data from one month this year shows 70% of dismissed cases were related to the CMO order.