The Shotspotter program is one of a number of new programs rolled out by Mayor Tim Keller’s administration, which is aimed at reducing violent crime. The technology was announced in October 2020 and the city is paying roughly $1.2 million to the Shotspotter company for a three-year contract.

APD Commander Lenny Nerbetski heads up the department’s use of the Shotspotter technology.

“They can hear the actual gunshots,” said Nerbetski as he demonstrated the interface on a laptop.

Officers also get alerts to a nearby gunshot via the system through their cell phones.

4 Investigator Nathan O’Neal: Do you feel that the Shotspotter program is effective in improving public safety?

Nerbetski: “Yeah absolutely… I’ll give a real-world example from the 4th of July weekend: So we had officers in our Valley Command who were out working in the downtown right around midnight. They received the gunshot Shotspotter alert… they literally rounded the corner and they arrested a subject that was standing there with a rifle in his hand.” 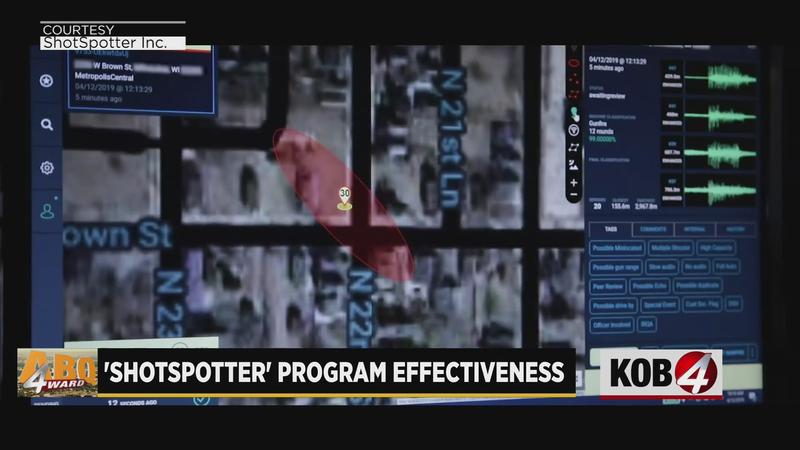 Nerbetski also pointed to a case in August 2020 where Shotspotter alerts led police to gunshots in a neighborhood in southeast Albuquerque. Police found Howard Kentcham who was eventually convicted of aggravated assault after shooting twice at his boyfriend.

Aside from individual examples, APD could not provide any data on the program’s overall impact on crime.

4 Investigator Nathan O’Neal: If you could quantify that, is there a way to do that?

The KOB 4 Investigates team requested a year’s worth of Shotspotter data from APD. It revealed more than 1,700 gunshot detections within its coverage area between June 2020 and May 2021.

However, the data provided is incomplete. There was no information about where the gunshots were detected or whether they resulted in arrested or evidence of any gun-related crime.

In a letter provide by Shotspotter, the company said, in part: “APD is expressly prohibited from distributing or making our Data or records available to anyone outside the agency.”

Nerbetski: “Shotspotter actually owns the data. They actually own the data that they collect and they make it available to us.

Nerbetski: “That’s their standard terms. That’s with every client that they have out there.”

When APD first announced the shotspotter program last year, the department began tweeting out anecdotal examples of the how the technology was working. They even included an #APDShotSpotter hashtag — but there have been no similar posts in almost a year.

Across the country, Shotspotter is facing growing criticism and questions about its usefulness.

In Chicago, a recent study conducted by the Macarthur Justice Center found 89 percent of the Shotspotter deployments led to no evidence of a gun-related crime. The City of Chicago is now facing calls to cancel the multi-million dollar contract with Shotspotter.

Back in Albuquerque, APD has no intention of abandoning the technology.

“Anybody who talks about to states that they feel that Shotspotter is not giving them everything they need, or it’s not reducing shootings, I think has an over expectation of what Shotspotter is,” said APD Chief Harold Medina in a recent interview.

Chief Medina says Shotspotter is just another tool in his department’s arsenal to respond to crime and to help prosecute criminal. However, it’s worth mentioning – it still remains a mystery as to how effective the technology is in producing results.

Still, in many cases, APD brass says Shotspotter can help with crime scene investigations, including helping to locate critical evidence like bullet casings.

“The technology allows us to respond better and I hope that if anybody is thinking about firing a gun in the city of Albuquerque, they’ll think twice. Knowing that we’re coming, we’re coming and we’re looking for you and we’re going to find you,” said Nerbetski.