ABQ 4WARD: What can the city council do to curb violent crime in Albuquerque?

ALBUQUERQUE, N.M. — As Albuquerque’s homicide numbers surpass a grim record, KOB 4’s ABQ 4WARD series takes a look at the role the city council can play in tackling the rise in violent crime.

After lengthy conversations with multiple city councilors, it seems many are out of new ideas on ways to curb the rising homicide numbers.

Some city councilors have complaints about public safety strategies from the Albuquerque Police Department and Mayor Tim Keller. Some want more money for certain projects, and they would like better implementation of some existing initiatives.

They’re also quick to point out what they say they’ve done over the years to find solutions. They funded and supported APD and many anti-crime initiatives, and they’ve lobbied state lawmakers for the ability to take more action on the city level. 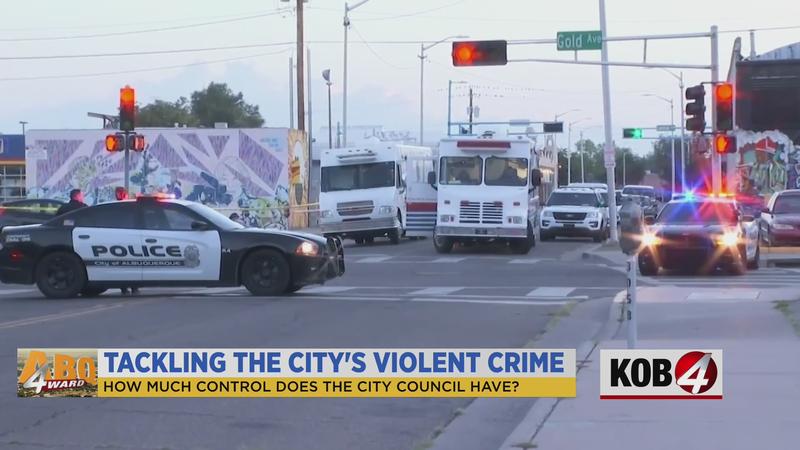 “Let’s be honest. Everybody’s frustrated,” Davis said. “Clearly more has to be done.”

About two-thirds of this year’s homicides have taken place in the four districts mainly located south of I-40. The most — nearly 1 in 3 — have been Davis’ district.

Davis admits the council hasn’t been perfect, but he thinks Mayor Keller and APD leadership took too long to get new initiatives up and running. He says APD and the mayor need a comprehensive plan.

“That doesn’t exist in terms of what is our plan month to month, year to year in terms of addressing these issues. We’re still sort of playing whack-a-mole, responding to the call, instead of getting ahead of it,” Davis said.

Davis, a former police officer himself, doesn’t believe recruiting is the issue for APD. It’s what the department does with new officers once it gets them.

When asked whether it’s realistic that progress can be made to prevent crime in Albuquerque in the next year, Davis replied:

“Yeah. It totally is, but we have to be smart about what we’re doing.”

Benton says the city council has successfully lobbied for Department of Justice grants, and worked on APD reform and recruiting.

But Benton admits the role that the council can play in those efforts is limited.

Both Benton and Davis say stricter gun control laws would help. Mayor Keller has banned guns from certain city-owned areas, but the courts or the Roundhouse would have to give city council the ability to enact stricter measures.

Benton also believes the responsibility is on him and his colleagues to look at fighting crime from outside the justice system.

Benton says the focus should be on early childhood education and affordable housing.

Peña seems to echo Benton’s take as far as the role city council could play in a proactive approach, saying the focus should be on funding for more resources for mental health and substance abuse to prevent violence before it happens.

“We’re doing some really good things,” she said. “I think that when we don’t have the opportunities or resources available for people, then issues begin to persist,” Peña said.

When asked if she thinks it’s realistic for Albuquerque to make progress in combating violent crime, she replied:

Some city councils in other parts of the country have declared emergencies over rising homicide numbers. Davis says Albuquerque cannot do that because city law prevents it.