The zoo is one of a few facilities with a multi-generational elephant herd – which they are celebrating this month.

"Rosie is our mama elephant and she’s 28," Lindsey Eagan, a senior elephant keeper at the zoo, said. "Thorne is her youngest calf at the moment. He is three years old and Jasmine is his big sister. She’s going to be eight in October."

Eagan has worked around these majestic animals for more than 14 years and knows a lot about them. According to her, fully-grown female elephants tend to weigh 8,000-9,000 lbs and they have a universal average lifespan of about 50 years but can even live to be 70 years old.

However, these elephants are becoming rarer. 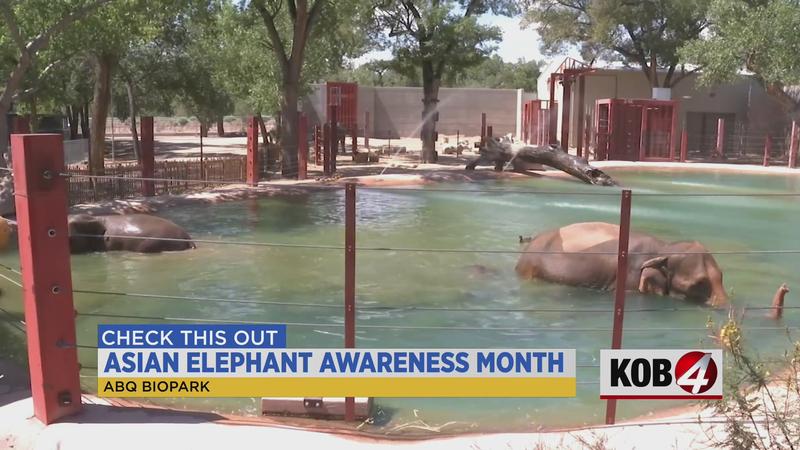 "Worldwide Asian elephants are really losing their populations very quickly," said Lindsey Eagan, a senior elephant keeper at the zoo. "There are only 30,000 to 50,000 Asian elephants left in the world, which is one-tenth of the African elephant population."

Zoo officials will not have the same huge events for the month but they are reaching out to the public to create awareness on social media about the elephants and ways to keeping them safe in the wild.

"One of the best things that people can do is look for products that are sustainably farmed," Eagan urged.

Our daily consumption of palm oil can also impact herds.

"Palm oil, if it’s not managed sustainably or correctly, is a crop that can devastate forests quickly and it forces elephants into conflict with humans in those areas," Eagan said. "So, we may end up with more interactions with humans when elephants don’t need to be in those spaces."

Some farms have crops in elephant migration routes but some elephant-safe tea farms are also doing their duty by developing elephant-safe barriers in order to keep the elephants out of the farms.

Apps like the sustainable Palm Oil Shop let you scan products to see if they’re sustainable.

This fall, a new elephant observation deck at the Zoo will allow people to get a better look at the five acres of land that these elephant-tastic animals call home.

"For now, the elephant exhibit will stay the same," Eagan said. "We won’t get any extra exhibit space, but the public will get a much better view of them."