ALBUQUERQUE, N.M. – The new Amazon complex on Albuquerque’s West Side is expanding even more. The facility has quickly become one of the biggest employers in the metro area.

"We had been seeing activity at that site for a while and just kind of had the feeling that more growth was coming,” said Rachel Sams, editor-in-chief of Albuquerque Business First.

Sams said she wasn’t entirely surprised that Amazon had bigger plans for the Duke City, but the scale of what the company is doing was something else.

"When we heard it was two new sites with hundreds of jobs— that was a little more than what we had anticipated,” she said.

In addition to the Amazon Fulfillment Center, which is currently under construction, another sorting facility center is also planned. The sorting center will act as the “middle man” after packages are ordered, and before they get sent out for shipping.

"So it was very interesting to hear, a year later after a yer of pandemic, that additional jobs were coming to the Albuquerque Amazon presence,” Sams said.

It’s a major change for the west mesa off I-40, an area that previously had no infrastructure.

"Bernalillo County said it was spending 6 and half million dollars on an infrastructure park out there with the goal of attracting companies like Amazon to locate and grow in that area,” Sams said.

Sams said Amazon found itself in a unique position due to the pandemic.

“Amazon has not had all of the same impacts of the pandemic as other companies had because many of us have been working and learning from home and ordering things online we may have once bought at a store,” she said.

With more people ordering from home, the demand is high for industrial real estate, which Albuquerque has plenty of.

“I can’t give you a specific rank off the top of my head, but certainly, especially after the expansion, I would say absolutely they are in the top 10, probably top five of industrial employers in the area,” Sams said. 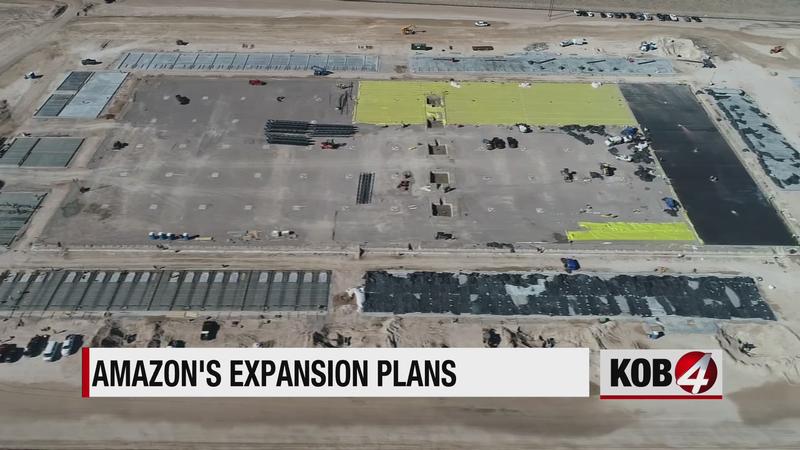