ALBUQUERQUE, N.M. – The Albuquerque Police Department will not be allowed to participate in Albuquerque’s LGBTQ+ Pride festivities this summer.

Cops at Pride has been a discussion across the country over the last few years, with a few major cities, including Denver, Seattle, and New York City banning police from their Pride events.

“I motion to not allow APD in the Pride parade or in Pride Fest 2022 with the possibility for revisit for 2023 at the AGM if lines of communication have been open and the community feedback has been positive,” said Bia Romero vice president of ABQ Pride Board, during Sunday’s meeting.

This motion lead to heavy discussion among board members. Some very against cops at Pride.

“I think it is disrespectful to our community but also to our ancestors you know people forget that Stonewall wasn’t, ‘hey let’s get together and play I will survive,’ it was a riot! It was an intersectional riot that lasted three days,” said Frankie Flores, New Mexico Pride 2022 titleholder.

Other board members argued police should be included.

“I’m still on the fence, I’m not sure. While I hear your point, and I agree with Lolo’s stuff but I think we should, in some sense, have them at Pride this year just to build that relationship to show the community we are with them, and they are with us,” board member Mathew Maturio said.

But a big point of Sunday’s discussion revolved around how APD was invited to be a part of the conversation, but did not send anyone.

“The news is here, where is APD? This is not a private thing where they didn’t know it was going on, they had opportunity to be here today or send a representative today,” Romero said.

In previous years, APD rode down the parade route with the rest of the floats. In 2019, they shared pictures of officers interacting with the crowd. And in 2021 they had a booth at Pride Fest on the Expo New Mexico grounds. But this year, 2022, that won’t be able to happen

All but one member raised their hands in support in Sunday’s meeting. The motion passed with a large majority.

But just because APD is banned from Pride this year, that doesn’t mean the police will never be at Pride again.

“Moving forward, I will take this on myself to work with officer Chase, the community ambassador with APD, because we do want to heal this. We are an organization that has the power to impact our community and we do want to have that relationship moving forward,” said Josh Martinez secretary of ABQ Pride Board.

After the vote, KOB 4 spoke to APD Community Ambassador Chase Jewell about Sunday’s vote to ban APD from pride. He said this was not the outcome he was expecting.

“I would say it is more of a surprise, but it is something that we are willing to work with the Pride board moving forward,” Jewell said over the phone. “It’s not something that we are going to force ourselves to be a part of, if they are not ready for us to be in the events or in Pride then that’s OK and that is a relationship we will continue to work on."

Jewell adds APD respects the board’s decision and they will continue to work together.

While he was not able to make it to Sunday’s meeting, he made a point to be put on next month’s agenda to continue this conversation where they can work out what the public safety aspect of Pride will look like. 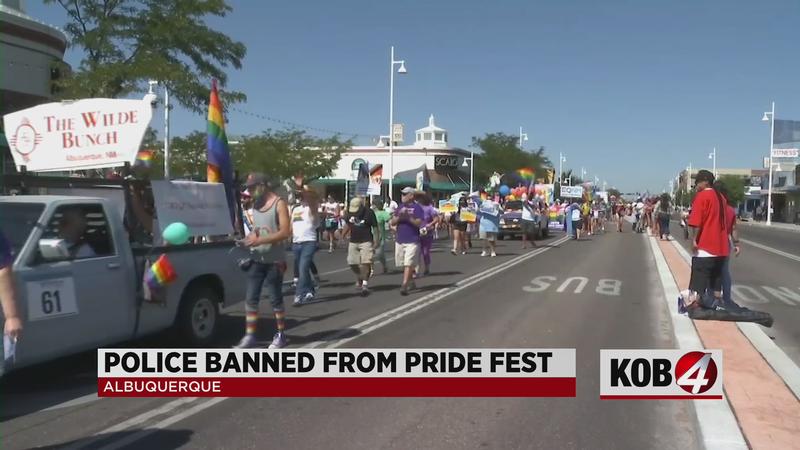