ROSWELL, N.M- On the second day of the murder trial of Luis Jimenez, jurors heard from additional witnesses, including the man who broke into the house with Jimenez just before the shooting allegedly happened.

Joseph Barnhill, 34, testified that on Dec. 11, 2012, he and Jimenez broke into the 1500 block of West Third Street residence, where 39-year-old Saul Sanchez was shot and killed.

Prosecutors allege Jimenez shot Sanchez when he was confronted during the burglary. Barnhill told jurors, Jimenez admitted to shooting and killing someone just before they drove away from the house.

“He just tells me he did something, that he hurt somebody, killed somebody, he thinks,” Barnhill said.

He reacted with disbelief. 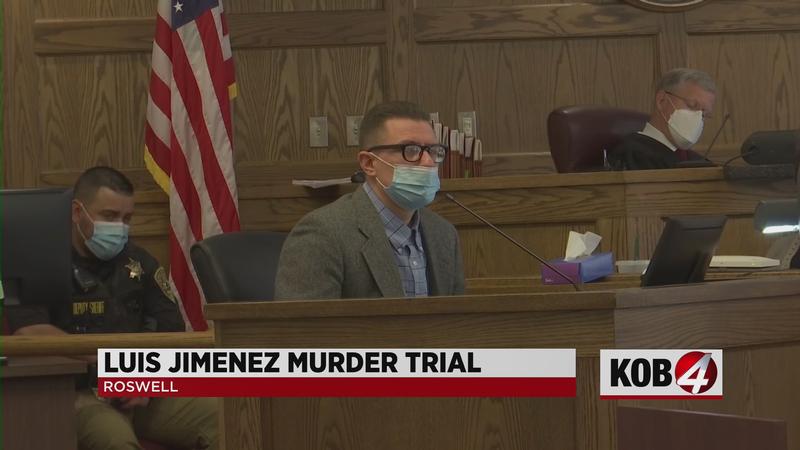 “And I didn’t actually believe it until saw it on the news the next morning,” Barnhill added. He maintained that he did not shoot anyone that day in the house, and that he did not have a gun on his person that day.

In his testimony, Barnhill said Jimenez was driving around with him that day, when they discussed committing a burglary.

“In our minds, we were trying to get stuff, to sell, something like that,” he said.

Barnhill testified they soon ended up on Third Street when they arrived the house. He said that he remembered a friend of his had lived at the house several years before and wanted to stop and see if he still lived there.

Jimenez then stopped the car, and Barnhill said he got out and knocked on the door. When nobody answered, Barnhill said he and Jimenez parked in an alley behind the house. They then broke a window and entered the house through the back.

Barnhill said once they were inside, he thought he heard a car coming, and attempted to alert Jimenez who was in another room.

He then took a few items from the house, exited the house through the back and went to the car. Jimenez then joined him a few moments later in the car and they drove away.

After that, the two men then went to a jewelry store, where Barnhill said Jimenez got $30 for some jewelry he had stolen from the house. He added that Jimenez then dropped him off a few blocks from the East Jefferson Street house where Barnhill lived.

The defense during cross examination pointed out some of the inconstancies in Barnhill’s testimony and the various accounts he gave to authorities about what happened.

Melissa Sawyers, Jimenez’s attorney, said that though Barnhill said they had initially gone to the house because of a friend of Barnhill’s, she said that when he was later questioned by an FBI agent about the shooting and the burglary he said they chose that house because, a relative of his lived nearby, and that if police came while they were in the house, he could leave and hide at a relative’s house.

He also admitted under questioning by Sawyers that he had been doing methamphetamine at Jimenez’s house before the burglary.