ALBUQUERQUE, N.M. — Days before the New Mexico Legislature convenes for its 30-day session, there is a push to help some members of the Hispanic community who have been devastated by the pandemic.

With millions in federal dollars received by the state from the American Rescue Plan and a $1.6 billion state budget surplus, some say lawmakers and the governor are well-positioned to help.

“I am imploring our governor and our state legislators to use the ARPA funding and state budget surplus to assist the most vulnerable of the population,” said Kasandra Gandara of the Las Cruces City Council.

Gandara joined other community leaders from across the state in a press conference Thursday to express support for such action.

They point to a recent study that points to the harsh realities facing New Mexico Hispanics during the pandemic. The survey by BSP Research of 1,000 Hispanics throughout the state was conducted in December. 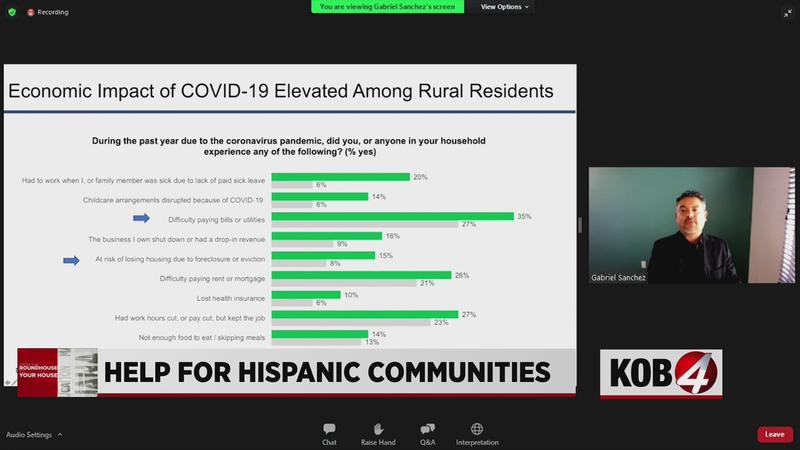 Dr. Gabriel Sanchez, a lead research for BSP Research, said depleted savings and tight budgets have been even harder for Hispanics in rural areas.

Many of those Hispanic residents, he said, lack access to paid sick leave, and were more likely to have trouble paying bills or mortgages.

“So again, tough times for everybody across the state, but particularly we look at rural Hispanic residents we see really gapping inequalities facing that particular subgroup of the overall population,” Sanchez said.

Significant concerns have also been voiced for immigrants, who often face barriers in obtaining social services, and often did not have access to state or federal stimulus payments.

“It is in the news all the time that immigrants are hardworking people who start their own businesses and they are front line workers, so critical during the pandemic both of these, yet they have had some of the most difficult accessing any help,” said Isaac Benton of the Albuquerque City Council.