ALBUQUERQUE, N.M.- The murder of George Floyd had a major impact on New Mexico.

Te Barry, the co-founder of the Black New Mexico Movement, said the last year has motivated him.

Days after Floyd’s murder at the hands of a police officer, people marched for justice in Albuquerque. 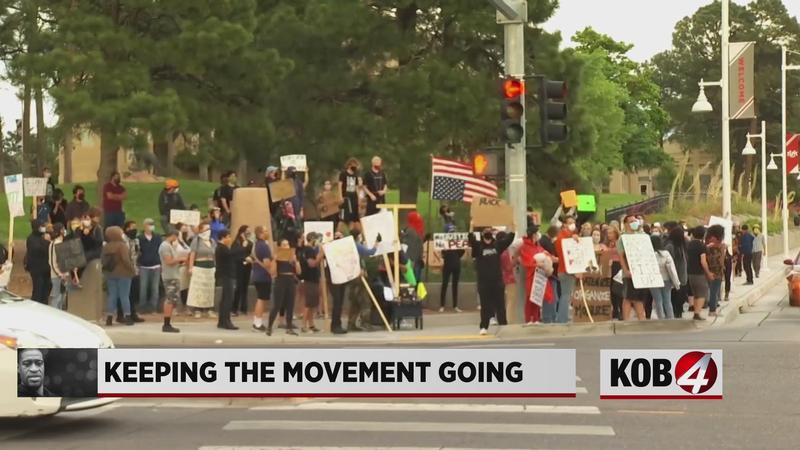 "The big thing about George Floyd is what he did," said Torrance Green, co-founder of the Black New Mexico Movement. "He sparked the whole movement last year."

Behind the scene, Barry and Green have been doing a lot of work.

"We’ve been busy putting in a lot of work," Green said.

"We speak about change, but what is change? Change is when you go do something. When you get up and actually do something. So I say, when real change comes about that’s when we can have another conversation. But, for now it’s all just a work," Barry added.

They are working to bridge a gap between a community and police.

"In our minds, the police aren’t people we want to deal with, but as long they’re here, we have to deal with them," Barry said. "It’s kinda like you at a job with a bad boss, you don’t like that guy, but he’s still your boss."

The Albuquerque has been making some changes in response to activists.

The department rolled out a new ambassador program. It designates an officer to act as a liaison for different minority groups. APD is also hosting racially-focused town hall meetings.

In addition, the city is launching the Albuquerque Community Safety Department.

Barry says it’s all a start to mending a broken a relationship.

"We have a lot more work to still to do," Barry said.

APD also added a new position, a superintendent or reform, in large part to address a history of issues with use of force in the department.

To mark the anniversary of Floyd’s death, the Black New Mexico Movement is holding a vigil at Roosevelt Park and marching to the Albuquerque Center for Peace.