ALBUQUERQUE, N.M. — Newly-released lapel video shows the perspective of the first Valencia County Sheriff’s deputy who responded to Kiria Milton’s 911 call in early November. Reports show she made that call because she was worried she would hurt her children.

In the video, the deputy sees Milton standing outside her El Cerro Mission home, crying.

Deputies then go inside to check her four-year-old and three-week-old sons. A deputy takes Milton to an ambulance, where she explains what led to that 911 call.

"I feel frustrated, like, when one stops crying, the other one starts crying," Milton said. "I just know I love those guys and I wouldn’t hurt them but they are frustrating the **** out of me." 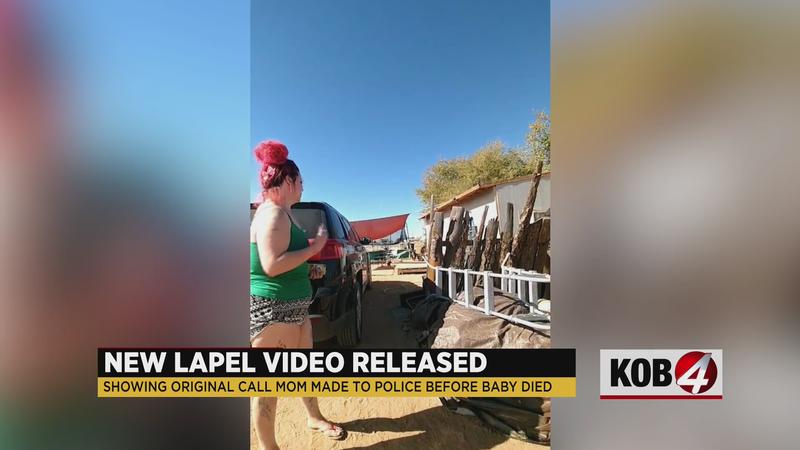 Milton said the children’s father was out of town for work at the time. Inside the home, deputies found that both children were OK."

Deputy: "Looks like the living situations are alright. No problems. I’m seeing the living conditions. Food is stocked, the pantry, water is working. Kids are behaving OK."

However, given Milton’s concerns, the deputies tell her they’re taking her to a hospital to be examined.

Deputy: "Have you ever heard of postpartum depression? Cause that could be one thing. It’s happened before in the past where mothers have hurt their kids and got to the point where they kill them. I don’t want you to ever do that. I’m sure you don’t, right?"

At first, Milton is hesitant but agrees to go to the hospital. The children are then taken to the sheriff’s office, and a deputy calls their father. The father said that Milton had called him. He said he was in Roswell, but he drove all the way back.

Deputy: Do you know if she has postpartum?

Father: I don’t know. She thinks she does, sir.

A week later, the baby died. After that happened, the father told a deputy that they had just diagnosed her with postpartum the week prior.

CYFD had allowed the children to be in their father’s care after that initial incident, but didn’t want the children left alone with Milton.

However, it was clear the father sometimes had to leave town for work. Deputies called the CYFD caseworker after Milton was put in the hospital – to see if a better safety plan was in place.

Deputy: "Did you guys do a parenting plan? Or a safety plan?"

CYFD Investigator: “No. Not right now, ’cause mom is not in the household. So we’re waiting ’til mom gets out ’cause she was admitted."

Deputy: "Okay, so you guys never did a safety plan on that?"

Deputy: "OK. And you’re waiting until mom gets out?"

CYFD Investigator: "Once mom is released, then we’re going to have a family-centered meeting and have other family as well attend to make a plan. Because mom is not allowed to be with the kids alone. And dad knows that, too."

The safety plan was not put in place before the baby was killed. Milton has been charged with intentional abuse of a child resulting in death.