AFR response times: How long does it take first responders to arrive?

ALBUQUERQUE, N.M. — Albuquerque Fire Rescue gets about 300 calls per day, according to AFR spokesman Tom Ruiz.

"The most minor to the most severe call, COVID included, we’re able to adapt to all of those and help our community as needed," Ruiz said.

On Monday night, AFR and police were dispatched to a shooting call at Lead and 13th Street.

"In those types of calls – those calls where someone’s life is in the balance – seconds matter, minutes matter, and we know that," Ruiz said. 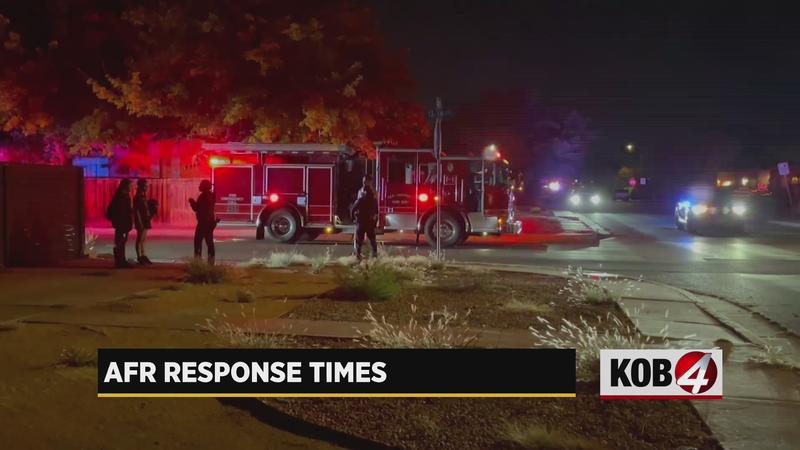 However, a rule is in place for AFR to wait to respond to a scene that involves a violent crime, until the police department gives word that it is secure.

"If there’s some sort of violence going on, we have to protect ourselves, our firefighters," Ruiz said.

"It absolutely holds us back," Cheney said. "There’s scenes that take a while to get secure and that’s to not fault of the police officers. Sometimes the scenes are more dynamic than other scenes."

Both Cheney and Ruiz agree that it’s important for the first responders – who are there to save lives – to protect their own.

"It’s really hard for us to tell folks who are in that position that we have to wait in order to provide care," Ruiz said. "Because, if we put ourselves in harm’s way, and if we get ourselves injured, then there’s nobody to provide that level of care."

"I know that’s a long period of time, especially when a life is in the balance, but in order for us to do our job effectively, we have to be able to walk into a scene that’s secure," Ruiz said.

Ruiz also told KOB 4 the National Fire Protection Association standards require AFR to respond to a high-priority call within eight minutes. He said they achieve eight minutes or less, 90% of the time.