ALBUQUERQUE, N.M.- An Albuquerque High School teacher was recorded telling his online students that he was prepared to resign over the district resuming in-person learning.

"I would really like to finish out the school year, but I am prepared to resign," said chemistry teacher Dr. Rafael Leckie.

He made the comment to his 10th grade class.

"I believe this is totally insane," he said, referring to the resumption of in-person learning.

Responding to a question from a student, Leckie went on to criticize parents for pushing for in-person learning. 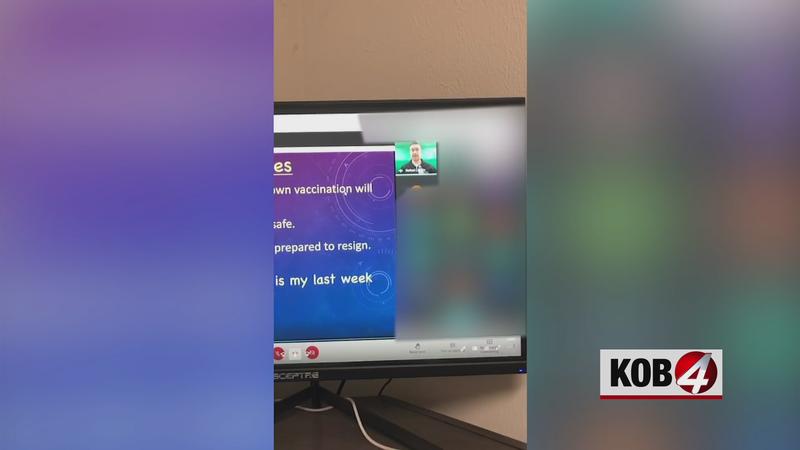 "Desperate for their free child care. That’s why," he said.

"The Democrats," he said. "They want to show they’re not too beholden to the teachers and their union."

He also told the students it’s not safe for them to return.

Leckie said he understands that his comments may upset parents, but he defended his positions.

"I think it’s really, really important to be up front and honest with students," he said. ""If you can’t be honest, they’ll see it."

"I actually think it’s really, really important that they understand how people are dealing with these things," Leckie added.

Leckie said he will only resign if he’s asked to return before he is fully vaccinated.

An APS spokesperson sent KOB 4 a statement about Leckie’s comments to his class:

"Albuquerque Public Schools doesn’t usually discuss personnel issues. Short video clips without context can create space for unfair judgements. The district will meet with the teacher to gather facts around the incident and proceed accordingly. The APS procedural directive states teachers must remain objective and unbiased and refrain from sharing their personal political views in the classroom."