ALBUQUERQUE, N.M. – A New Mexico church holds two pieces of the World Trade Center, and it held a ceremony this morning to honor all the victims of 9/11.

The Chapel Bell At Sacred Heart Catholic Church in Albuquerque’s Barelas neighborhood, marking the moment the first plane hit the World Trade Center on this day 20 years ago.

Inside the church, a sacred memorial to that devastating day when our world changed forever. Two steel beams that once supported the twin towers, Deacon Robert Vigil said it’s a powerful reminder to never forget.

“It’s like it just happened yesterday, the emotions, they don’t go away. It’s something that’s instilled in me, in many of us, history has a way of doing that. Hard to believe here we are 20 years later, but the story has to continue to be told, especially for those that were not born at that time,” said Deacon Robert Vigil of Sacred Heart Catholic Church.

The story of how the beams arrived at the church is remarkable. The pastor wrote the Mayor of New York shortly after 9/11 – explaining one of the church’s bells had recently discovered in a South Valley property after it was lost for decades and the Bare las community wanted to build a new bell tower. 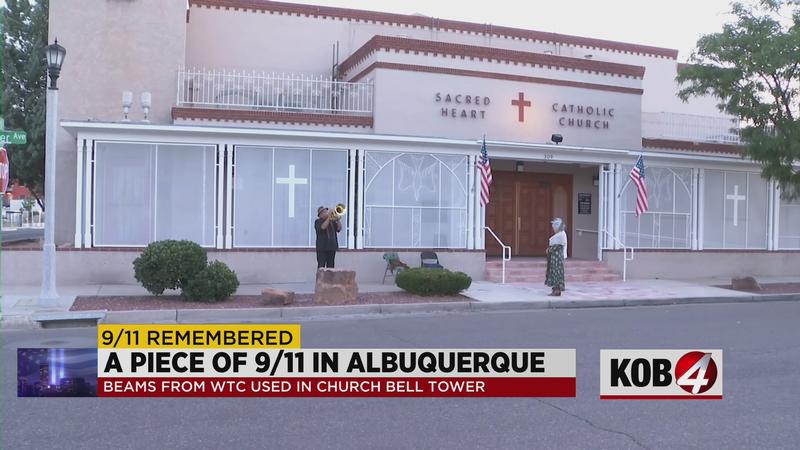 “Needless to say, the mayor responded, ‘We received a letter on a Monday morning stating I read your letter and what a wonderful story. You’ll be the first church in America to receive two full sized beams, but you have to pick them up by Saturday,’” said Vigil.

Vigil said a truck driver from New York volunteered to drive the beams across the country and deliver them to the church for free. The community then came together and raised money for a new bell tower to house the beams.

Vigil said the beams are now a symbol of unity, resiliency that can come from such a horrific tragedy.

“But also hope. Hope of a spirit that we continue to work together as we did that day even though it was a tragedy we all just came together and we put aside our differences and worked together for the sake of everyone.”