On Monday, fire crews put out a fire in the Albuquerque bosque near Tingley and Alcalde in the same spot where two fires burned last week.

AFR said they believe someone may have set the two earlier fires intentionally.

"I would say unfortunately they are caused by people being not safe, and not utilizing our open spaces wisely and safely. The fires that happened last week, there wasn’t any rain or any lightning, so you can rule out that it was weather caused," said Lt. Tom Ruiz, Public Information Officer for Albuquerque Fire Rescue.

AFR said fire season started even earlier this year because it’s been so dry. 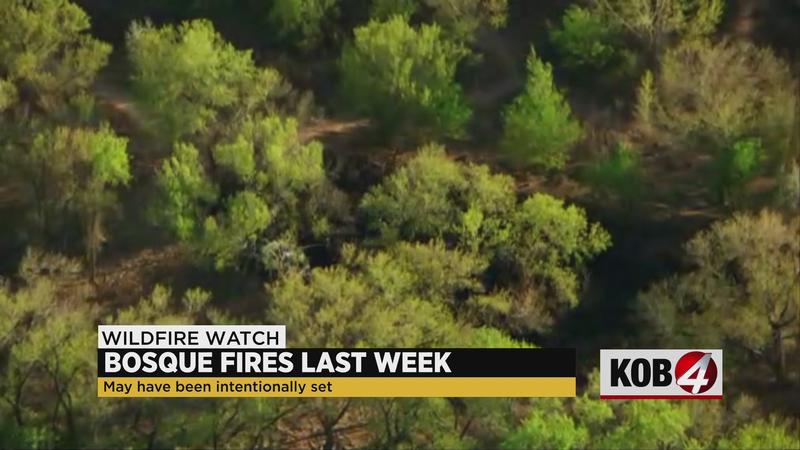 “These fires can grow really quickly. The underbrush is dry, there’s a lot of it, and the chance for it spreading is unfortunately very high. And in the bosque area there’s some homes that are really close by that can potentially be in the area or in the way of the bosque fire,” said Ruiz.

There have been seven fires so far in Albuquerque’s open spaces from the bosque to the foothills. Ruiz said Albuquerque is always in stage one fire restrictions, so there’s no open burning or smoking in those areas. He said they don’t want to over-restrict those areas, and that the people who are out along the bosque will usually quickly notify AFR of any trouble.

“When they see something, they are able to alert us that much quicker. And we can get dispatched and deployed, and get a handle if there is a fire relatively quickly,” said Ruiz.

There are five wildland stations with 34 firefighters in the Wildland Task Force. But Ruiz said all firefighters have some basic knowledge of how to fight these types of fires. He’s expecting those crews to be even busier than normal.

“Normal fire season is April through August. We’re not even close to that. It was February, and it was already dry, and we’re going to go well into the fall of this year,” said Ruiz.

That means everyone will have to do their part.

Ruiz said they will have some upcoming thinning projects. They will be clearing out some underbrush and dried leaves in an effort to remove some of those fast-burning fuels.