ALBUQUERQUE, N.M. — It looks like the mayoral campaign for Sheriff Manny Gonzales won’t get public financing for now.

Albuquerque’s City Hearing Officer Rip Harwood ruled that the city clerk acted properly on July 9 to deny $660,000 in public financing to the Gonzales campaign, amid allegations of fraud and forgery.

Harwood said a pivotal basis for the ruling is the fact that Gonzales admitted that many of the qualifying contribution forms submitted to the city were forgeries.

"I reject the argument that ‘this happens in every campaign.’ It should not happen in any campaign, and I reject the corollary notion that some level of fraud and falsification is tolerable or OK," Harwood stated. "In my view, the clerk has the right and duty to deny participating candidate certification whenever fraud or falsification is discovered, without the need to first quantify it."

Harwood also said a pivotal basis for the ruling was the "Salvation Army incident," in which the sheriff reportedly told one of his supporters that they did not have to pay the $5 contribution. Instead, he allegedly said he would pay for it. 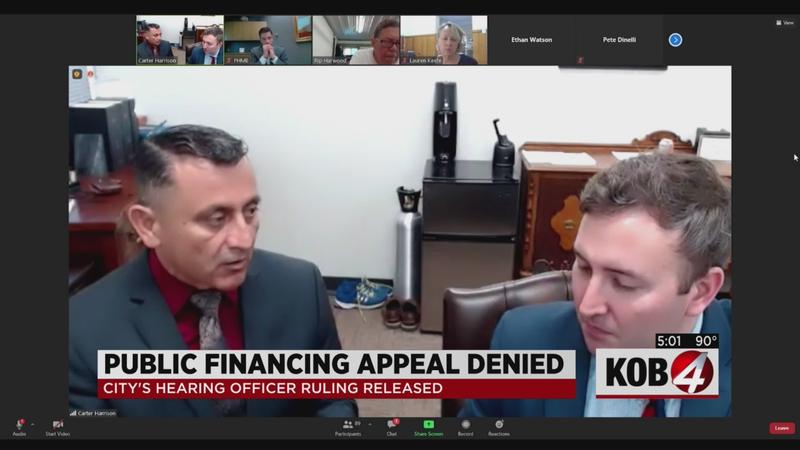 "It is evidence of direct knowledge of fraud or falsification," Harwood stated. "No persuasive evidence was adduced to suggest that the contributer attesting to his conversation with the sheriff had any motive to falsify what he claims was said."

The city’s hearing officer also rejected the argument that the city clerk had an ulterior motive to deny Gonzales public financing.

Gonzales can appeal this decision in district court, but he has not announced any plans to do so.

KOB 4 reached out to both campaigns about the decision. We did not hear back from Gonzales’ campaign.

Mayor Tim Keller provided the following statement: "We applaud today’s ruling by the city’s hearing officer and believe due process was followed and justice was served. The ruling shows that no one, not even the sheriff, is above the law."