Meanwhile, Albuquerque’s first lady Elizabeth Keller wrote an op-ed in today’s Albuquerque Journal. She said "unfortunately, another candidate and his team have attacked our family with malicious and unsubstantiated claims about Tim and our police officers."

“Now I am committed to continue our recovery and seeing it through to the thousands of new jobs coming online reinvigorating public safety going after the revolving door,” said Keller.

“I’m here to talk about the issues and both of my opponents are responsible for what is happening in the City of Albuquerque,” said Aragon.

“I will continue to challenge that science keep Albuquerque open between essential and non-essential, no more not in my Albuquerque not in my administration and this is something that has hurt us in every way shape or form,” said Aragon.

“As a city we want to make sure every city worker has a vaccine but we need to make sure that we do that within the bounds of our collective bargaining agreements and work with our unions to do that, we are not going to be able to legally or thoughtfully line people up and give them the vaccine,” Keller said.

“The most important thing for any individual employed with the state federal government or county government is that you have to do what’s right for you as an individual and we need and should be getting that advice from a physician and not a politician,” said Gonzales.

The tension between Keller and Gonzales escalated after KOB 4’s mayoral debate – when Gonzales brought up rumors of domestic violence and other personal allegations against Keller– all of which we investigated and could not confirm.

This debate did not take that route – and all three candidates squarely focused on what their visions are for the Duke City.

“I’ve listened to the people and they are telling me crime is the number one issue and the next pressing issue is homelessness, and these two issues are hindering the growth of our city,” Gonzales said.

“I love Albuquerque I do I’ve come back I’ve lived other places commerce we have to grow the City of Albuquerque we have had a lost decade and corruption get rid of it every where think about that,” said Aragon.

“With me you know what you will get I will problem solve, I will call it like it is and I will never give up,” said Keller.

The election is next Tuesday, Nov. 2. 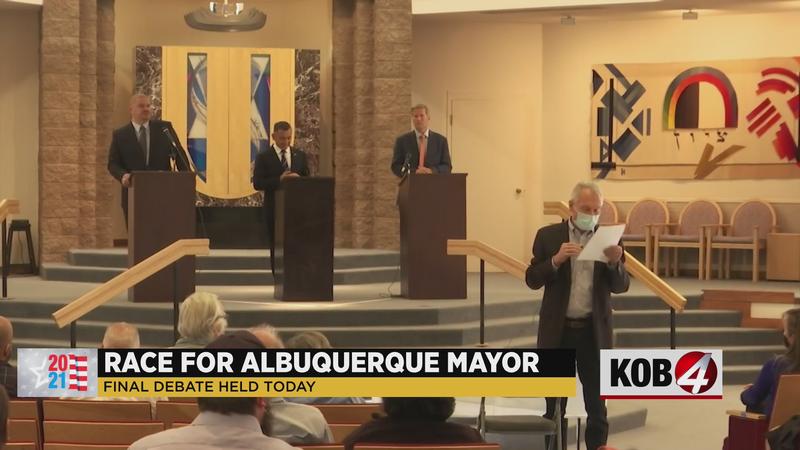