ALBUQUERQUE, N.M. – The 78th homicide in Albuquerque happened at the Motel 6 on Avenida Cesar Chavez. Police say hotels and motels are seeing the biggest increase in homicides.

"This hotel in particular, I think uh, it’s seen its fair share of crime over the past few years," said APD Chief Harold Medina. "I think the hot spot is hotels, without a doubt."

Data from APD shows 16 homicides have happened at addresses connected to local motels and hotels in 2021.

Investigators said they noticed an underlying pattern in these killings. There are four "hot spots" with multiple homicides this year: The Motel 6 where the latest deadly shooting happened, the Ramada Inn on Hotel Circle, and the American Inn and Suites and the Desert Sands Inn and Suites — both off Central.

Imesh Vaidya, hotel owner and CEO at Premier Hospitality, said he believes it’s because locals have the cash but nowhere to go and that police response needs to improve. 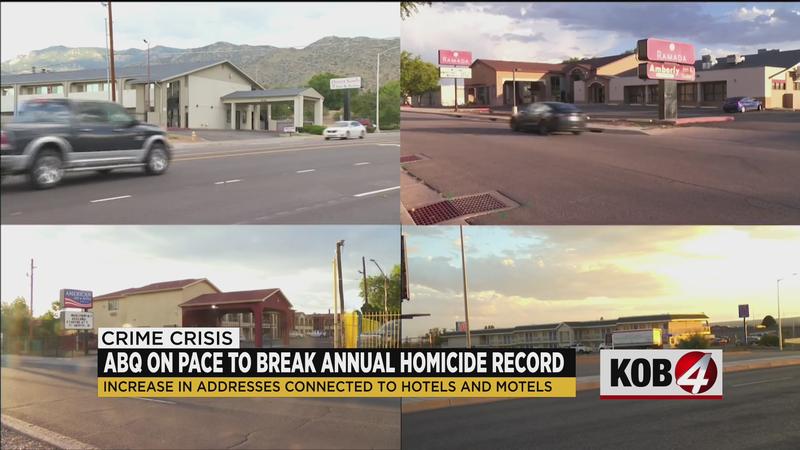 “They have the money right now and there is not any other alternatives for them to spend their money, so they do come to the hotels,” said Vaidya. “The hotels have increased security, we’ve added cameras, we’ve added actual security at the hotels."

Medina did address the concern, saying they are looking at sending additional officers to hotels and motels, but he doesn’t want to spread the staff too thin.

So far this year, 36 homicides were reported at homes or apartment complexes, three killings happened at local parks and 24 were at miscellaneous spots — like intersections, for example.

According to APD, with five months left in the year, the city is just two homicides away from the record set in 2019. Albuquerque police have reported 78 homicides in 2021 and six homicides in the last week.