ALBUQUERQUE, N.M. – Homelessness in Albuquerque is one of the many topics of this campaign season, which is set to wrap up Tuesday.

Two separate camps in the Barelas neighborhood are getting attention from neighbors and police. Officers have tried to relocate the folks, but neighbors said they’re persistent.

Neighbors say it’s a delicate balance between wanting to see people in the homeless population have a safe place to stay, and needing to feel safe and clean in their own backyard. Some said it’s a balance they’ve been trying to find for years, that has recently only gotten more difficult.

"This isn’t my choice, I mean of course I’d be happier if there was a nice clean empty lot next to me,” said Bruce Davis, Barelas neighborhood resident.

But Davis said that the downtown lot hasn’t been clean or empty for years. He said people living in tents have occupied it for at least eight of the twelve years he’s been living in his home.

"I don’t wanna turn it into just you know these folks are making me miserable because I know they’re more miserable than I am,” said Davis.

But he said he’s at a crossroads, he’s called the city’s 311 line several times over the years. Just last week, police responded to a request to have the camp relocated.

"The police came and shook things up and nine out of ten people left, and 36 hours later they were all back,” said Davis.

Davis said he’s even chatted with some of the long-term campers about what they need.

And in a different part of the Barelas neighborhood, Brian Fejer said he has the same concerns about a different camp.

He took pictures of a homeless camp at the Barelas community center earlier this month.

"These people have been living here for months. And they have propane tanks, they have grills, I see them smoke drugs,” Fejer said.

He emailed the community center, and one leader responded saying:

"As much as we may want to just make these people go away, we also have to temper that with compassion for these displaced neighbors of ours. This being a public building and public park, we have been told by APD there is only so much they can do to get these folks to completely vacate."

"When someone is on private property that is Criminal Trespass. If someone is experiencing this, they can call 242-COPS and officers will be dispatched out."

"It’s such a complex problem. And I think the city officials get pretty black and white about it, and it’s a million shades of grey out here,” said Fejer.

A representative from the city’s Solid Waste Department, that handles much of the work around encampments, said:

"Situations that are deemed an immediate hazard take priority. The city will offer services to the individual, then inform them they must relocate. Relocating an individual or group also does not prevent them from returning to the area."

Fejer said homelessness is his number one concern– and took it into consideration when he cast his early vote.

"I just wanna walk my dog and live in a safe neighborhood and get these people the help they need. And they’re not getting it." 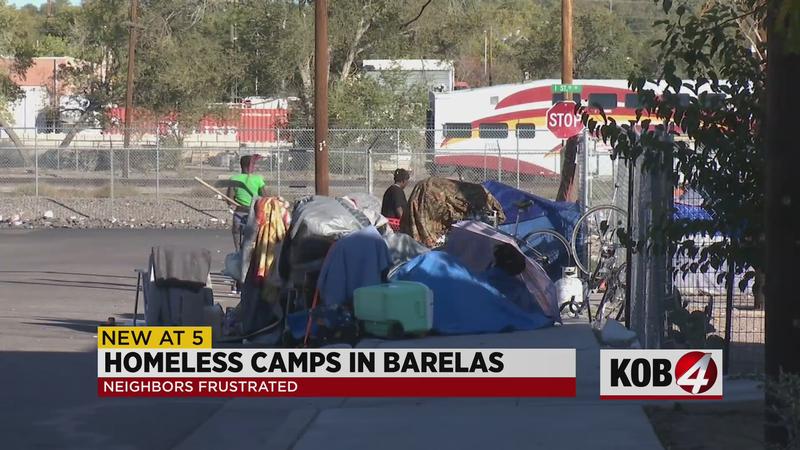