ALBUQUERQUE, N.M. – After taking a year off during the pandemic, the sixth annual Pay it Pet-Ward event kicked off Thursday at Long Leash on Life on Montgomery.

"We moved to Albuquerque to open this store, we wanted people to support us, so we feel it’s only right that we’re giving back to the community as well,” said co-owner Norm Shrout.

This year, the pet supply store in northeast Albuquerque is giving away more than 130,000 pounds of food to 35 different organizations.

"We have rescue groups, we have shelters, we have pet food banks that are participating today, and all of them are serving under– less fortunate pets,” Shrout said. “The benefit is, this will help feed the pets through the winter."

Long Leash on Life was able to collect roughly $400,000 worth of food by teaming up with vendors and some generous customers. A lot of the food was donated, the rest was discounted and the pet store was more than happy to cover the cost.

"Then they can focus their money on vet bills and some of the other costs that are involved in rescuing or in the shelters," Shrout said.

He added that this event requires several months of planning and dozens of volunteers to help pull it off.

"It’s been really really rewarding to see the whole community come together for an event of this magnitude," he said.

Shrout told KOB 4 it is worth it to be able to give shelters and families enough food to get thousands of animals through the next two or three months.

"It’s one thing to sell people pet food and pet supplies, but it’s certainly another thing to do right by them and make sure they’re getting really what they need, and these pets, they didn’t ask to be homeless,” he said. “These restricted income people that are not able to afford the food, they didn’t ask to be in those positions, so anything that we can do to help is really, it’s beyond our pleasure." 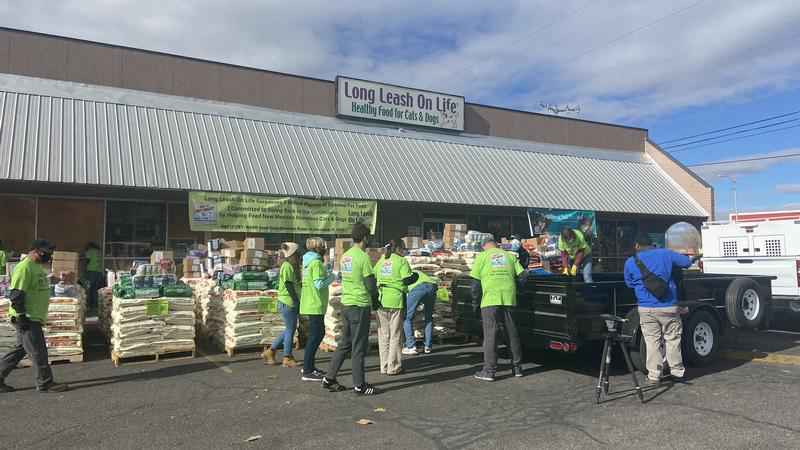