ALBUQUERQUE, N.M. — People are out, businesses are open, but the recovery is just getting started.

"We are seeing some very, very positive momentum with respect to downtown," Mayor Tim Keller said.

Keller wants downtown to be a place people want to be. He said that starts with addressing one of the biggest community concerns – crime.

"Being downtown and being visible, having a place people can walk right up to file a police report or ask for services or assistance, that’s going to make us that much more effective," Albuquerque Police Department Officer Hence Williams said.

APD will have a new downtown police station filling an empty space at the Rosenwald Building at Fourth and Central, which is an upgrade from its current post at the transit center. 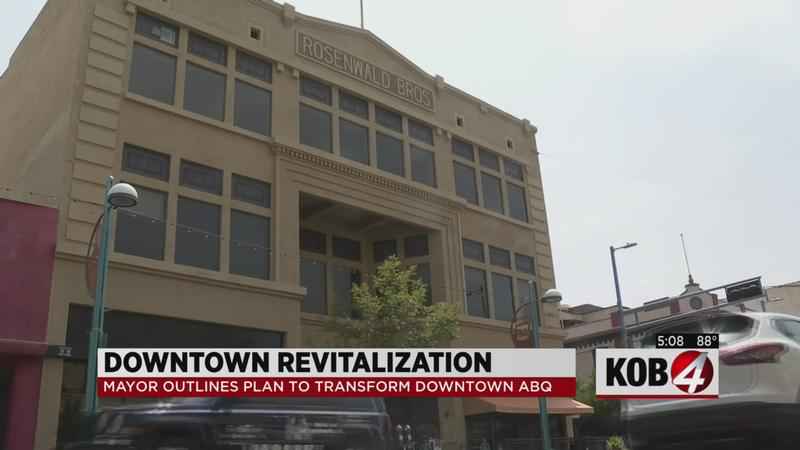 "The challenge with the station in the Alvarado Transit Center, it’s very hidden," Keller said. "We put a sign out but it’s hard for people to find and it’s also at just one end of downtown."

City officials said the revitalization efforts extended beyond that building. They revamped more lighting during the pandemic but they have more plans to light up dark areas of downtown, including alleys.

Officials are also planning to literally clean the place up – with street sweepers and clean-up crews.

"We’ll also have a dedicated graffiti crew assigned to this downtown district to erraticate any graffiti even before it gets called in," said Matthew Whelan, director of the Solid Waste Department.

Albuquerque is also moving forward with the development of a one-mile Rail Trail that will connect the Rail Yards to the Albuquerque Convention Center, Transit Station, and Glorietta Station. The $5 million project is in the design phase.