ALBUQUERQUE, N.M. – It was a terrible day about a month ago in Albuquerque when four officers were hurt responding to a robbery call.

Now we’re hearing from the officer who was shot in his vest, Sean Kenny.

“The call came out as an armed robbery at Manzano High School, that obviously piqued my interest,” said Kenny.

Instead, he showed up at Juan Tabo and Copper.

“I came around the corner at Juan Tabo and, I believe somewhere right by the Big O and, I see Mario and James Eichel running down the alley,” said Kenny. “When I saw them run down the alley, I whipped a U-turn. I’m heading southbound on Juan Tabo and I can hear the gunfire in my car over the radio, and there’s a lot of it.”

Kenny said he made sure to put on his rifle plate carrier that’s like a bulletproof vest, except it can stop rifle fire.

He pulled into the Dutch Brothers parking lot and then:

“The suspect popped up on my right and I’m in my driver’s seat, I’m not ready for this,” Kenny said.

Kenny said he got out of his car and fired a few rounds.

“I went around to the back, I realize there is a ton of vehicles in the Dutch Brother’s parking lot, and they’re all occupied I can see their faces, and so I’m backtracking with another plan.”

He said the gun battle lasted for a long time — one and a half to two minutes. Once officers arrested the suspect, James Ramirez, another officer came up to inspect Kenny to make sure he wasn’t hit.

“He looks points right at the center of my chest and says, ‘hey, is that hole new?’ I go, ‘what hole?’ I look down, oh, I don’t remember seeing it, he starts feeling around and goes ‘I think you were hit,’ sure enough, I got a little notebook, he pulls it out, its got a hole in it and I’m like, yeah, I was hit.”

Kenny said the suspect came ready for a fight.

“This guy planned, he 100% absolutely knew what he was doing, 100%. He had a ton of ammo, he had a ton of magazines and he was ready to go to war with somebody, whether that was us or the people that he robbed.”

But ultimately, Kenny said he is happy to be alive.

“27 years of doing this I have done some crazy stuff, that was by far and away the most terrified I’ve been in my life, didn’t think I was going to see my wife and my son again.”

There’s no bodycam footage of the incident from Kenny because when he put on his rifle plate carrier, it somehow turned off his body camera. 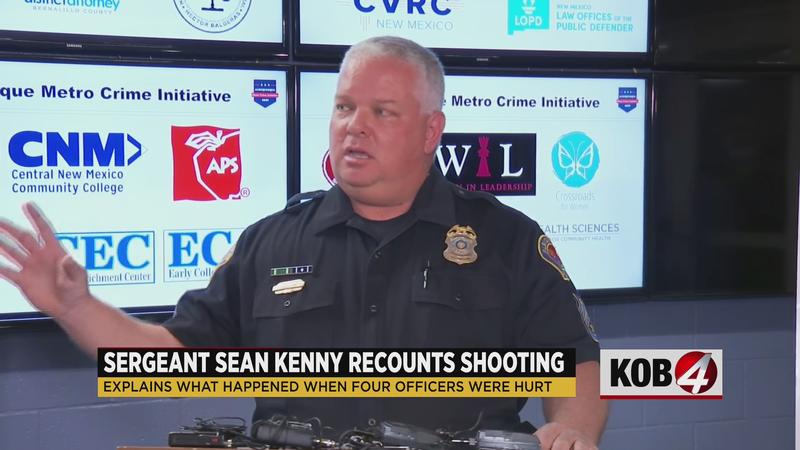