ALBUQUERQUE, N.M. — The pandemic has brought out a lot of different emotions from people and recently, a local Catholic priest called off a middle school basketball game because of the issue of face masks.

He described to KOB 4 what happened on Jan. 7, during a sixth-grade basketball game between Hope Christian School and Legacy Academy that was held at his church’s gymnasium. He was at home when he got a call from someone at the game who asked him to go to the gym after people refused to wear their masks.

That’s when he decided to step onto the court in the middle of the game to address the crowd, recording video on his cell phone. 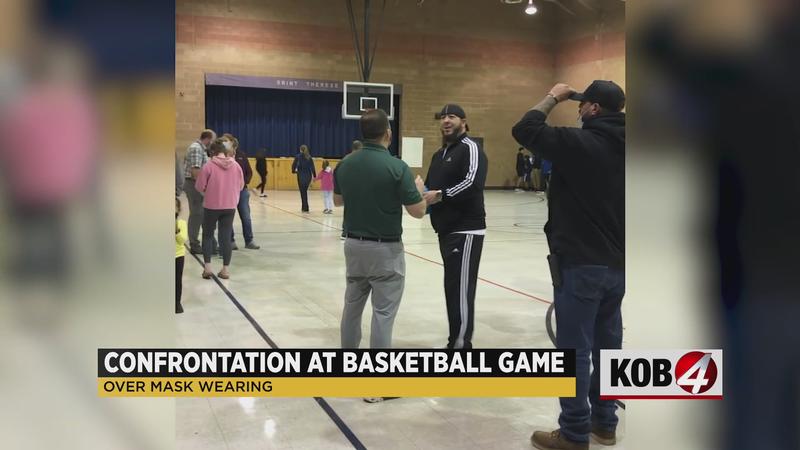 "I am the Catholic priest here, you are in our home," Chavez said in the video. He also said, according to state law and the Archdiocese of Santa Fe, masks must be worn inside.

In the video, some of the crowd can be heard reacting negatively.

"So we ask that you put on masks, or the doors are here and there," Chavez said.

At one point, one person speaks up, saying, "Our boys are trying to play. It costs you nothing to put your mask on, just put it on so our kids can play."

One of the people who was seen not wearing a mask replies, "Mind your own business. I’m drinking, thank you."

The man was holding a water bottle, but after a few seconds, Chavez decides to call off the game.

KOB 4 reached out to the Albuquerque Parochial and Independent Athletic League which oversees these games. We were told that teams at the game were given a weeklong temporary suspension which has since been lifted. The teams in question will now undergo a probation period for an unspecified amount of time. However, one of the schools says no action was taken against them.

A representative for Hope Christian School sent KOB 4 this statement:

A spokesperson for the Legacy Academy shared the following statement:

“With a series of games going on, Legacy Academy parents walked into a tense situation in which yelling was already going on. At some point, someone yelled back at the priest about the mask because he was drinking water at the time. After the incident we agreed to ‘probation’ so that our kids could get back to playing and we have reminded our parents to obey host gym rules. While we believe it is unfair to fixate on us, it is more unfair to the kids to drag out the grievance process. We understand that our course of action will enable our student-athletes to complete their full season.”