ALBUQUERQUE, N.M. — A local priest says he’s torn between his new home here in Albuquerque and his homeland of Ukraine.

Father Artur Bubnevych has been serving as a priest for the Byzantine Catholic Church of America for the last nine years, but before that, he grew up in the Soviet Union.

"When the Soviet Union fell apart, I thought it would never come back," Bubnevych said. "I really never even imagined something like that was coming back."

When he first arrived in the U.S., tensions back in Ukraine were already high.

"At that time, I thought it was good that I left Ukraine because it was kind of a mess," Bubnevych said. "I left three months before the wars started in eastern Ukraine. I left in the fall of 2013 and three months after, there were strikes and riots in Kiev." 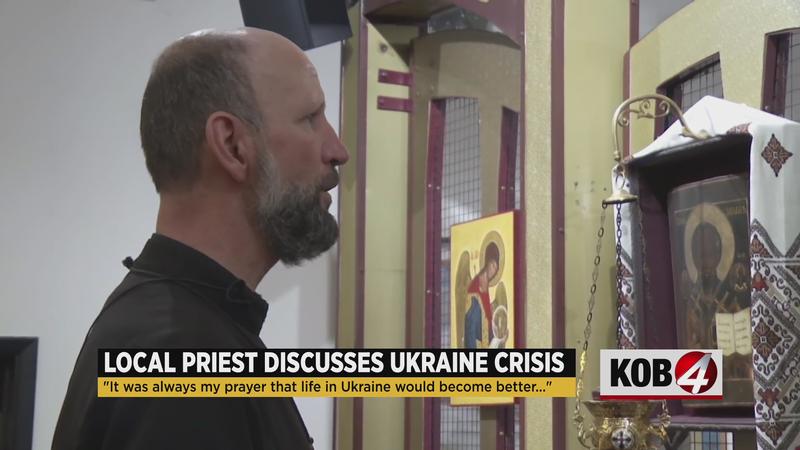 Nine years later, he says the divide in his homeland has grown.

"Ukraine is divided, Russia’s hand is in Ukraine deep, very deep, so it was always my prayer that life in Ukraine would become better and the Ukrainian state would become more Democratic and more pro-Western," Bubnevych said.

Gov. Michelle Lujan Grisham tweeted, in part, that "the attack on Ukraine is an attack on democracy and I stand with the president and leaders across the country in condemning President Putin and taking strong action to hold Russia accountable."

U.S. Sen. Martin Heinrich wrote, "We must stay united with our allies in the coming weeks and exact the strongest possible price for Russia’s unjustified aggression and attempt to overthrow Ukraine’s legitimate democracy. Russia will be held accountable."

Sen. Ben Ray Luján issued the following statement, saying, "This violent action is not only an attack on Ukraine, but also an assault on the principles of democracy and a threat to global security."