Albuquerque shelters are filled to capacity, except one

ALBUQUERQUE, N.M. – Freezing temperatures in Albuquerque has shelters filled to capacity. But city workers say there is still space left at one shelter meant to take on hundreds of people.

During the day when the sun is out, many told KOB 4 that they can handle the weather. But as soon as the sun is down like it is now, it’s insufferable.

The last few nights for those living at Coronado Park have been unbearable.

"It’s too cold out here, it’s ridiculous. People have been lighting their blankets on fire trying to keep warm."

The freezing temperatures leading to many starting small fires at the park or doing whatever they can to stay warm. Creating some issues.

For Kate, she’s been okay in the cold conditions.

"There have been a couple that have burned their tents down. I have extra socks on. I have three pairs of pants on to make sure I don’t get frost bit. "You know the two-year-old that kind of walks like this when you put them in a snow suit? Kind of like that,” said Kate.

But for many who don’t have extra clothing or a tent, they are trying to look for other places to go to or face the possibility of dying in the cold.

"It’s critically important that folks find a safe place to spend the night. As the temperatures drop it becomes very dangerous for folks to sleep outside,” said Lisa Huval CABQ deputy director of Housing and Homelessness.

Which is why Huval with the city says workers are going out to these spots to convince those living in the streets to go to shelters.

"Meeting people where they are at, talking with them at their encampments, making sure folks are safe and also providing information about resources,” said Huval.

However, it’s this time of the year where most of the shelters in town are at or near capacity.

"We do start to see an increasing number of people utilizing the shelter."

Which is why they are encouraging them to go to the Westside Emergency Housing Center, where they have about 450 available beds compared to the 100 at in city shelters. It’s about 20 miles away, but buses are able to take those there who need it.

As for COVID precautions at the shelters, KOB 4 was told the city is still testing those who come in and if they are positive they are able to still safely isolate at the shelters. 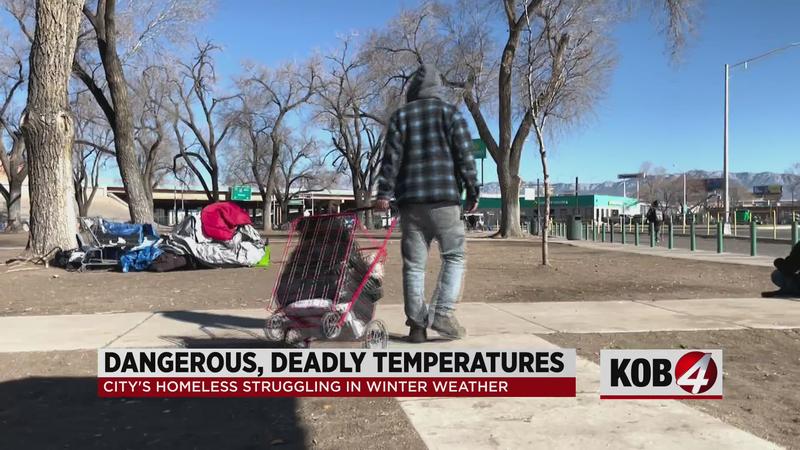