ALBUQUERQUE, N.M. — 24-year-old Mariah Duran will compete for Team USA as one of the first skateboarders in Olympic history.

"I love skating so much that at the end of the day, no matter the results of the Olympics, I’m gonna still be a skateboarder," Duran said.

When she first stepped on a board, she didn’t think that this would ever happen.

"Like I would’ve never thought skatebaording and the Olympics would be in the same sentence, and here I am, just about to go to Tokyo and represent New Mexico and represent USA," Duran said.

Duran got her start in Albuquerque – learning her first tricks at Los Altos Skate Park. 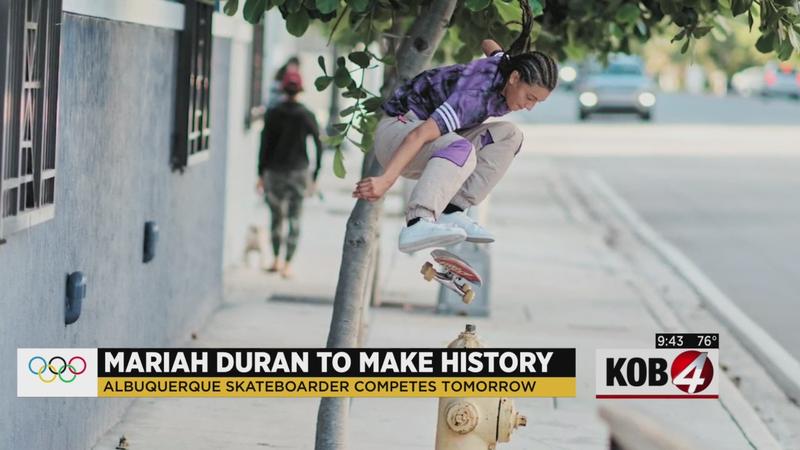 "That was definitely home ground for me," Duran said. "I grew up skating that. That was like, definitely my beginning years of just skating."

But her skills took her far outside the Land of Enchantment. Duran’s professional career got started back in 2018 and she’s racked up dozens of championships across the globe since then.

Duran was even ranked the No. 1 female street skateboarder in the country earlier this year.

"We officially announced like, the team that was going to Tokyo, and I had a moment where I could not believe it. I was super emotional, I think I even teared up and cried on stage, because someone asked me, ‘what would you tell your 10-year-old self?’" Duran said. "And I was just like, oh my God, I literally can’t believe I made it this far, like going from just falling in love with skating, to like working shifts at Dion’s and just like, somehow convincing myself that was only temporary and telling myself that every single day, and just believing in something that seemed impossible."

Duran said she’s excited to see what this new chapter brings, not just for her, but for skaters across the globe.

"I feel like setting the bar, when you set bars, I feel like they’re just meant to be climbed and someone else is going to bring something new to the table," she said. "I’m just excited more just to see the progression that skateboarding is going to have after this."

Regardless of what happens at the Games, Duran said she’s going to keep skating and she hopes to get more New Mexicans on boards, too.

"I’m trying to manifest like a facility in New Mexico, you know, for skateboarding, where we can, you know, have up-to-date parks that are preparing us, skaters like me, and hopefuls who want to pursue this at an elite level," Duran said. "I really just feel like it’s the only way to consider yourself successful, if you open the door for other people as well. It’s not, you know, a one-way street. You’re going to burn out if it’s like that, but if you have a whole collective that are just finding themselves and growing, it’s so rad to see that."

But for now – Duran says if you can believe it, you can achieve it.

The women’s street skateboarding event starts Sunday evening. Duran and three other women on Team USA will compete for a spot in the finals.