Albuquerque ‘spaceship’ home up for sale

ALBUQUERQUE, N.M. — One New Mexico man combined the traditions, art, and history of the Land of Enchantment all in one place—and now it’s up for sale.

Marten Griego spent the last 21 years turning an ordinary home in the Northeast Heights into an extraordinary work of art.

“It’s kind of like the edge of a cave. I thought of myself in the universe some place on another asteroid or something,” he said.

Nestled at the base of the Sandia Mountains, this spaceship home is ready to transport its next owners to another galaxy.

“I would think that people are fascinated with something new. Something created by somebody that they’ve never seen before—and once again, when I was building it I didn’t even know what I was creating,” Griego said. 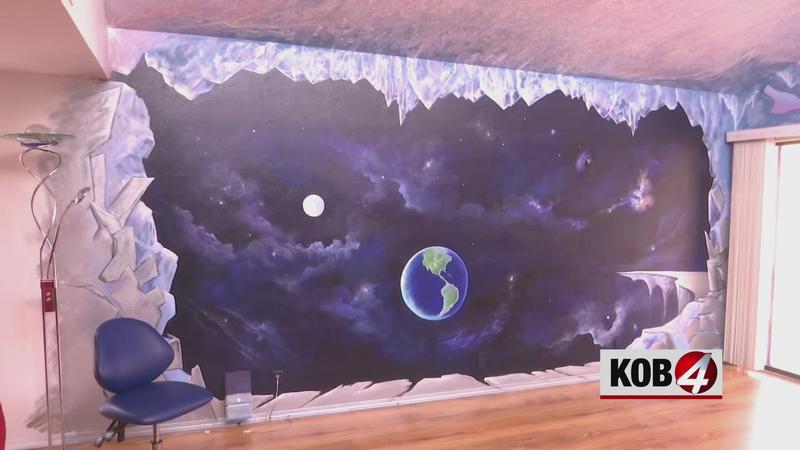 When Griego moved in, he started painting the home, but it wasn’t good enough. That’s when he started piecing together a spaceship wall and fireplace. Over the years, things started to fall into place. The entire creation is his own except for the murals.

The home is full of intricate details from the 3D murals, to the glass work, to the space-inspired kitchen. The backyard is full of surprises, too.

“It’s cool, it’s unique, it’s different. When we first walked in we were like, ‘This is similar to Meow Wolf’. It’s almost like you’re walking into a museum,” said Jonathan Ortiz, with Southwest Elite Reality.

Realtors Jonathan Ortiz and Alexandria Oberbeck will be the first to say that this home may not be for everyone, but they’re already receiving some serious interest.

“So we actually have someone right now who wants to buy it as it. Furniture and all. They just love everything about it,” said Oberbeck.

Griego said he plans on leaving Albuquerque altogether, but parting with his creation won’t be easy.

“Am I sad? When I first started thinking about it, I said ‘You’re lying to yourself. You’re never going to sell it,’” he said.