Albuquerque stabbing spree suspect to remain in jail ahead of trial

ALBUQUERQUE, N.M. — The man accused of going on a stabbing spree along Central in Albuquerque Sunday will stay in jail as he awaits trial. That is what Judge Britt Baca-Miller ruled during a detention hearing for Tobias Gutierrez Friday afternoon.

“I’m not sure what a GPS monitor will do. I mean, I’m not sure he would actually comply with house arrest or anyone would take him in,” she said.

Prosecutors had filed a pretrial detention motion to keep Gutierrez in jail, writing in the court filing that he is, “an extremely violent and dangerous person.”

Gutierrez is accused of stabbing the victims at random as he rode his bicycle along Central.

“He stabbed multiple people in the neck, the facial area, the back, and other very, very dangerous areas,” prosecutor Christine Jablonsky told the judge during the hearing. “It’s honestly a miracle that none of these individuals have passed away as a result of these injuries.” 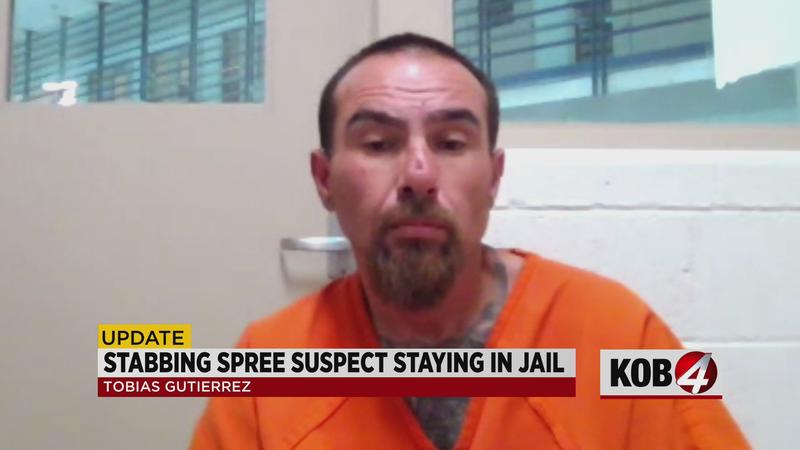 Gutierrez has a criminal history dating back more than two decades including burglary, battery, and drug charges. A public safety assessment tool that judges use recommended Gutierrez be released.

His defense attorney asked the judge to follow it and release Gutierrez on strict conditions.

“The court does have conditions that the court can impose,” said Heather LeBlanc. “Such as an inpatient treatment program, with GPS monitoring. Mr. Gutierrez also has indicated that if he were released he would be able to live with his mother. She is disabled.”