ALBUQUERQUE, N.M. – An Albuquerque woman was arrested overnight, and court records show that this was her 4th DWI arrest in 2 years – her 7th since 2005.

But KOB 4 learned she hasn’t spent much time behind bars.

After she was arrested, the report claims the suspect, 42-year-old Jennifer Whitey asked the deputy if he was single, and then reportedly told him that she would do anything he wanted if he cut her a break. When that didn’t work, she then tried to run away from the Sheriff’s station after asking to go to the bathroom.

Leading her to not only being charged with DWI but also bribery of an officer and attempt to escape custody.

This is her fourth arrest in two years, in those previous arrests, police say they found multiple open bottles of beer and hard liquor in her car. At one of the arrests, her breathalyzer results came back with two times the legal limit.

But when you look at the outcome of these cases, online court records show there really was no punishment for these cases. Some of the reasons include officers failing to appear in court, the prosecution dropped the charges, and in one case charges were never re-filed.

While that seems shocking, Lindsey Valdez with Mothers Against Drunk Driving says it happens all too often.

"When we hear situations like this, it’s very clear that something is not working and we have the criminal justice system for a reason to issue consequences. We have to understand every time someone makes that decision on the roadway that they are injuring innocent people,” said Valdez.

Whitey will be in front of a judge on Monday.

Since she has been convicted three previous times for DWI according to police, this would be a felony level incident.

According to a criminal complaint in 2020, police said the same thing. And again, court records show there were no consequences. 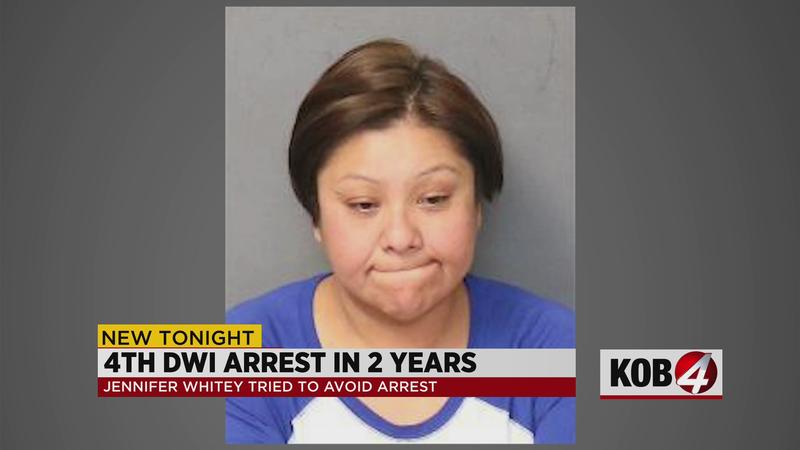