ALBUQUERQUE, N.M. – Amazon is settling down in the Duke City. Now the online retail giant wants to land some of its planes here.

City councilors introduced a ground lease agreement with the mega-company to build a new air cargo facility at the Albuquerque Sunport. If everything goes well – Amazon airplanes could start dotting the Albuquerque skies in just a few years.

A company spokesperson sent KOB 4 a statement saying they have not signed a lease yet, but are actively exploring new, local options.

It’s not clear how much cargo Amazon would move through the Sunport, but they’re going to have to build a new facility to do anything. That’s because Sunport officials said the current cargo operations at full capacity right now, but city leaders said there are plans to change that.

Keller said the city is working to develop an intermodal transportation hub at the Sunport. It would be a single transfer point for planes, trains, and trucks.

"We know we’ve got land at the Sunport, and we have high demand for cargo. So that’s where we’re going to focus much of our attention over the next few years,” said Keller.

The city recently secured a $6.5 million grant from the FAA to expand the Sunport’s cargo apron. The Sunport’s spokesperson said if the lease agreement is approved, Amazon would set the timeline on the new facility but everything is waiting on city council’s approval.

This is just the latest Amazon project in Albuquerque. One of the company’s official Instagram accounts revealed the new fulfillment center on the West Side opened just last week.

Amazon is also working on a new sortation center in the same complex. Now it’s turning to the Sunport.

"They know it’s already the crossroads of I-25 and I-40, and so they knew when they built that facility eventually they’d need something at the airport, so now that that facility is open and hiring they knew they needed the airport component,” Keller said. 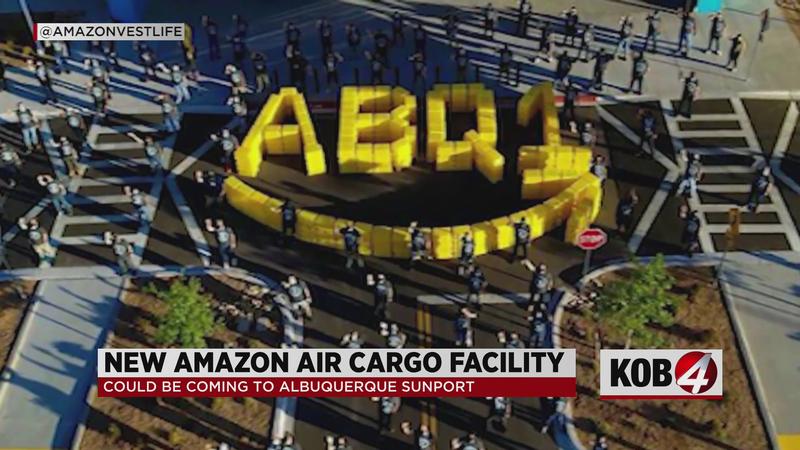