ALBUQUERQUE, N.M. — Bellehaven Elementary School has been the site of a anti-mask protest for four days.

A small group of protesters decided to set up outside the school after after one student reportedly did not want to wear a mask Monday.

"He came in Monday and I tried to tell them he’s not to be wearing a mask," said Erin Morrison, a parent who organized the protest. "He has freedom, he has a medical exemption and can’t breathe with them on. Pick whichever one, you can pick our rights, medical exemptions, religious exemption – we have freedom."

Morrison said APS officials and the school board aren’t listening. He believes his son – and any other parent and student – should have the choice to mask up.

According to the New Mexico Public Education Department’s school toolkit, there are no religious exemptions for mask wearing. There are limited mask exemptions: "anyone under the age of two or has trouble breathing," but it also said in those cases "fully remote learning is the best option." 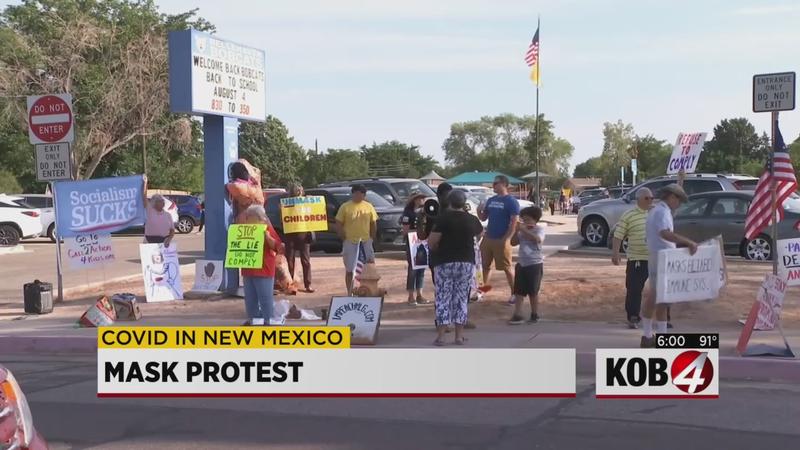 The group of protesters claims their rights are under attack. KOB 4 went to UNM law professor Joshua Kastenberg who said that may not be the case.

"I don’t think they’ll win on the argument that the right to a public education is being violated, because they are making the choice to have an alternative public education," Kastenberg said.

He said masks could be considered a dress code, in which the law will likely favor the schools.

"There’s a confusion in that when people are stressing their constitution right, yeah, their arguments, often, are correct," Kastenberg said. "But where those rights collide with the rights of others, that’s the part that’s being left out of the argument."

Some parents were upset with the protest and its message. They also said that children were scared by the protest.

APS officials said they cannot stop the protesting, but they do have the option of calling APS Police if things get out of hand.