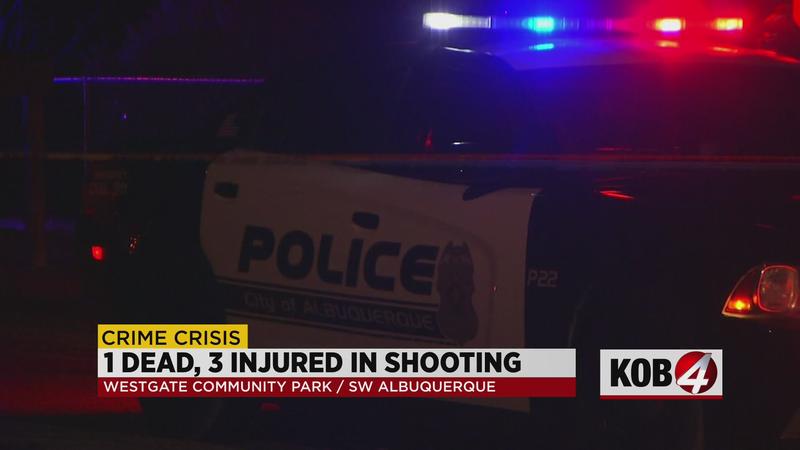 Police said the shooting happened in the area of Westgate Community Park in southwest Albuquerque.

Upon arrival, officers pronounced one person dead on scene.

“We heard the shots and it seemed a little distance, it didn’t seem like it was in the parking lot in the park,” said Dorothy Blea, neighbor.

Blea has lived across the street from the park for more than a decade and she says hearing gunshots at night is pretty normal for the neighborhood.

Shortly after hearing the gunshots, she heard sirens.

“We saw the two fire trucks on the street there, they kind of hesitated and then all of a sudden they shot up the hill and police cars as well,” Blea said.

When APD arrived on the scene they found four victims, all with gunshot wounds.

“At this time we can report one was treated and released on scene, one was listed in stable condition, one in critical condition and one individual is deceased on scene,” said APD Lt. Ray Delgreco.

But no suspects yet – now they are asking neighbors to help figure out what led to this shooting.

“We’re looking for any surveillance camera footage or any kind of those things that will assist in piecing together what happened here tonight,” said Delgreco.

Neighbors are asking the community to end gun violence.

“I just wish it would all stop, every day there is someone getting shot and kids are carrying guns and what not to schools it’s ridiculous, it’s crazy,” said Blea.

APD adds the next step in this investigation is to interview the victims once they are recovered to try and find out what led to the shooting.

In an update, officials said one of the three injured individuals is in critical but stable condition. The second has non-life-threatening injuries, and the final victim was treated and released.