KOB 4 learned that during this shooting spree, the male suspect was shooting at people who were inside their vehicles.

Police say they’re still trying to figure out exactly what happened, and why, as there are multiple scenes on Montgomery east of Tramway in the Foothills.

Dozens of officers swarmed the area just after 2 p.m. after hearing that two of their own were hit. The good news is – neither needed serious medical attention. Police say the man shot them with a shotgun outside a house when they approached.

"Both officers were in good spirits, I spoke to them, both of them should be fine from the physical wounds," said APD Chief Harold Medina.

Chaos unfolded quickly, and covered what amounts to a few blocks in an area that includes hundreds of homes, a shopping center and an APD substation – which is where the man shot the first victim, a woman who was in a vehicle.

Next, heading east, a man was shot in the leg, and the third victim police found was a woman who had been shot and killed in a vehicle. KOB 4 believes that happened in an area near Glenwood Springs. There are a lot of unanswered questions, like if the victims knew the suspect.

"We don’t know. We don’t know if the victims knew. Some of it seems like it could be random," said Medina.

Police did say that nothing makes it seem like it was a road rage incident.

"This is yet another example of what happens when there is a gun in the wrong hands, and it leads to violence. This is another clarion call from our city. We have to have every level of government focused on reducing gun violence," said Mayor Tim Keller.

KOB 4 is still waiting to find out the names of the victims and who the shooter was, but police did emphasize that he was the only person they were looking for.

"We will be out here through the rest of the night. Detectives will be interviewing everybody and trying to piece this together," said Medina.

Neighbors KOB 4 talked to Monday said they don’t usually worry about shootings in this part of town. Home alarms, maybe the occasional stolen car, but never gunfire in the middle of the day. 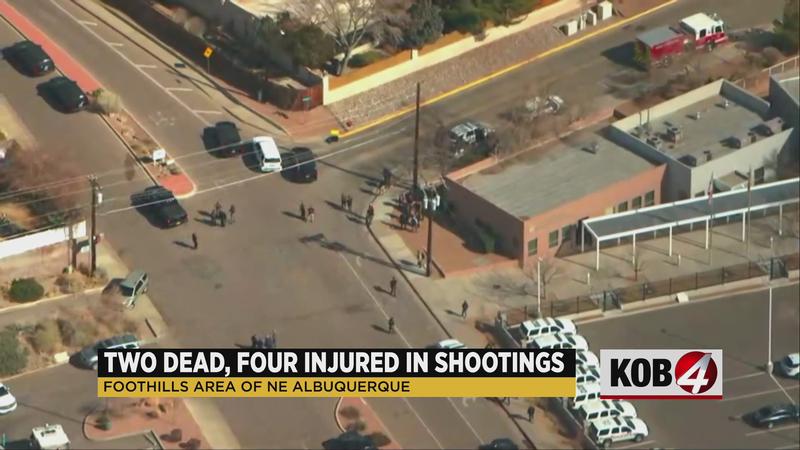