ALBUQUERQUE, N.M. – Some folks are organizing a huge event in downtown Albuquerque to celebrate 4/20 and they say police will not be blocking off streets like they requested.

KOB 4 spoke with the organizers of the cannabis-focused festival.

“The vision was going to start right here on 3rd Street so this is where the entrance was going to be and the exit was on 7th,” said Melissa Thompson, New Mexico 420 Fest organizer.

Melissa and Ken Thompson have put on the 420 fest for 6 years — they took a break during COVID — but with legal sales starting this year, they thought now is the perfect time to bring it back.

“We have been planning this since June of 2021 which we have talked to the city about it, letting them know that we will be doing it again this year,” said Melissa. “We wanted to present 420 as a positive image cannabis is not the stigma it was anymore it’s more of a celebration.”

But last week, they got a notification from the Albuquerque Police Department that two of the permits were denied.

“My heart dropped, heart dropped, we were lying in bed and the notification came in and heart dropped. We didn’t know what we would do, this could bankrupt our business if this doesn’t happen,” said Ken.

So far, they say they have spent $20,000 planning this festival—vendors have been booked and advertising has been paid for—but now all they want is to know why they were denied.

“Please somebody return our phone calls we cannot stop the enormous amount of people that are going to be here, we can’t do it,” said Ken.

When KOB 4 asked APD why the event was denied, they sent the following statement:

"This request was denied because the organizers wanted to shut down Central Ave. for most of the day in the middle of the work week. We have to shut down roads in the area at night because of traffic around the bars for public safety reasons. Shutting down Central on the same day would require more resources.

Ken and Melissa say they are expecting 2 to 10,000 folks to attend 420 fests and even if the streets aren’t blocked off, as of now they want to set up the vendors on the sidewalks.

“Our concern at this point is where are our attendees going to be going if the streets aren’t going to be blocked off? We want to make sure there is safety precautions outside as we will be promoting on our marketing level that we want to ensure that we are still celebrating cannabis in a safe way, and we are going to be supporting our local businesses,” said Melissa.

The festival is set for Wednesday, and even though recreational cannabis is legal in New Mexico, at that event no one would be able to buy or consume marijuana — because everyone is out in public. 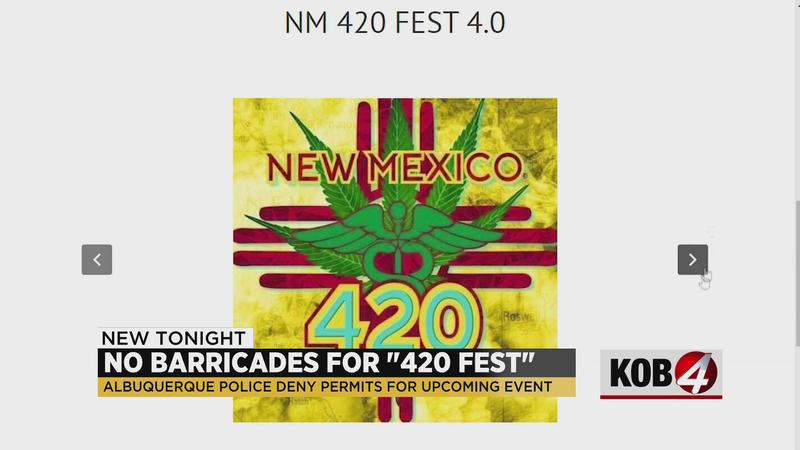