APD plans to crack down on off-highway vehicles

ALBUQUERQUE, N.M. — A new tactical plan is underway after a deadly hit-and-run prompted police to step up enforcement.

No more warnings – APD officers everywhere are instructed to cite and tow any off-highway vehicle driving illegally on city streets.

"None of these vehicles can operate legally on the streets of this city and there are no exceptions," said Albuquerque Police Department Deputy Chief Mike Smathers.

"We’ve seen 40, 50, up to 70 vehicles at a time, driving down I-40 – coming into the downtown area, driving down sidewalks, making pedestrians move out of the way for them. We’re going to tackle this and it’s zero tolerance," said APD Commander Nick Wheeler.

In the past, illegal drivers have successfully fled APD. Now, the top brass says that open space vehicles and air support will be used to track down those who flee. 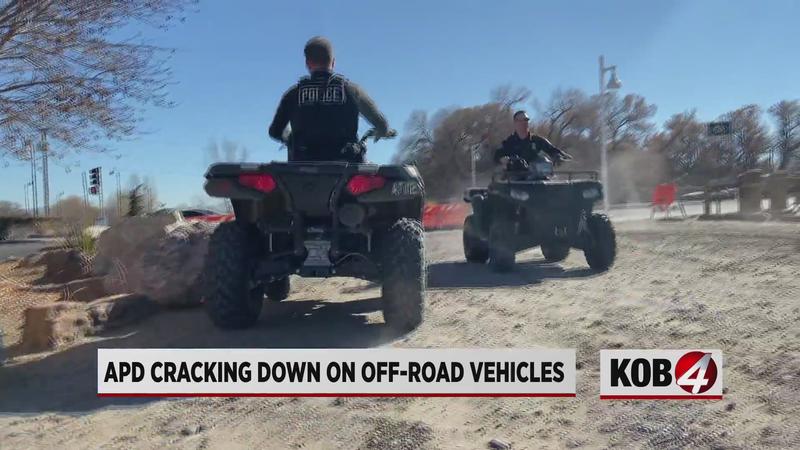 "And if you choose to flee, using the resources the chief mentioned," Wheeler said. "We will catch you and you will go to jail."

Smathers said he was at home when he learned a 7-year-old boy was hit and killed in a crosswalk at Central and Tingley. He also said the police department has noticed an increase in off-highway vehicles on city streets over the past year.

KOB 4 asked, should the police department have been doing more the enforce the law before someone was killed?

"The first thing I would say to that, I hope the community noticed how rapidly warrants were obtained in this case. It was full-court press for this entire police department…" Smathers said. "And I think our actions demonstrated that on behalf of the family. We owed them that."

So why not enforce the law this vigorously before?

"Resources are never an excuse for an issue, for us. I mean, they’re real. Those challenges are real, but we’re committed to this effort," Smathers said.

27-year-old Sergio Almanza, the suspect in the deadly hit-and-run outside of the River of Lights, is still on the run. The U.S. Marshals are now involved in the search for Almanza.