ALBUQUERQUE, N.M. – A lone suspect is responsible for a mass stabbing, causing a path of terror across northeast Albuquerque on Sunday, police said.

11 people were reportedly stabbed across seven scenes along or near Central Ave., starting downtown and going east, Albuquerque police spokesperson Gilbert Gallegos said in a news conference Sunday afternoon. Police still have not confirmed that the first scene is connected to the suspect, but they believe it is.

The suspect, 42-year-old Tobias Gutierrez, was taken into custody without any trouble. They believe he chose his victims at random, attacking them with a “large knife.”

Gutierrez was booked into Metro Detention Center overnight – Sunday into Monday – on charges of aggravated battery with a deadly weapon.

All 11 victims are alive and stable after initially being taken to four hospitals, Gallegos said, but some have been in critical condition. Some have since left the hospital.

The victims include someone who was eating inside a restaurant with their family, a person stabbed inside a tent and someone who had just been involved in a car crash.

Police describe the suspect as riding a BMX-style bike along Central as he stabbed people.

“It has been a task for us to really just piece everything together since it was over a period of time and involved several scenes,” Gallegos said.

Officers said the first call of a stabbing came in at 11 a.m. at or near Sister Bar downtown. Gallegos said they have not confirmed that the same suspect was responsible for that attack.

A little later, the suspect stabbed at least one person at Central and Harvard.

Then, around 2 p.m., calls started coming in for incidents about three miles east, including at Central and Pennsylvania.

The suspect stabbed two people at Central and Wyoming near the McDonald’s.

Another attack happened at Wyoming and Domingo, where the suspect stabbed someone inside a restaurant.

Police said they took the suspect into custody on Lomas and Wyoming, saying the man gave himself up when officers approached.

Albuquerque police are asking for anyone else who saw anything to contact them. 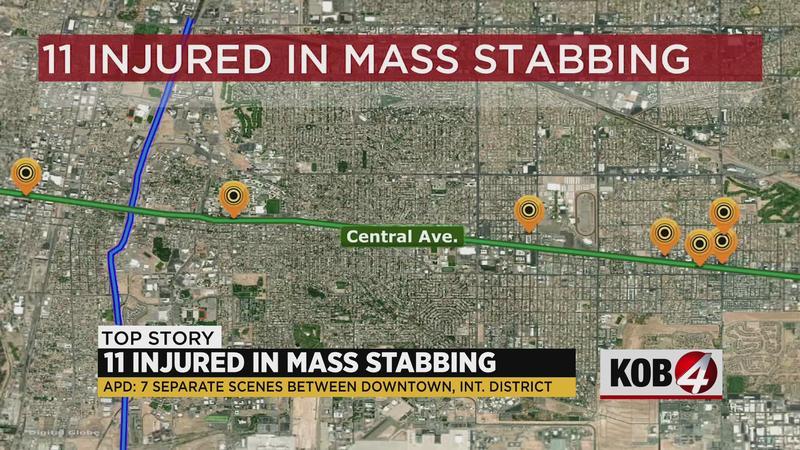