ALBUQUERQUE, N.M. – A vehicle rollover crash left 2 people dead and 7 injured on University Boulevard under I-40 Sunday morning. Now, police say the nine people inside the car were involved in a crime spree before the crash.

Police say a 19-year-old man and a 17-year-old female died in the crash.

Four females under 18, two adult men – including the driver – and a female of unknown age were also injured in the crash:

According to police, they’ve connected them to crimes at two other locations before the fatal crash.

It all started at an apartment complex on Lead Avenue in southeast Albuquerque when police showed up to break up a party at the Lucaya east apartments. At the time, they didn’t know they’d be piecing together three different crime scenes, all involving the same vehicle.

Neighbors in the 1500 block of Lead Avenue SE reported several people drinking, fighting, and carrying guns. As police approached, they noted a black car leaving the area, and they say the license plate matched the same car involved in the other crimes. 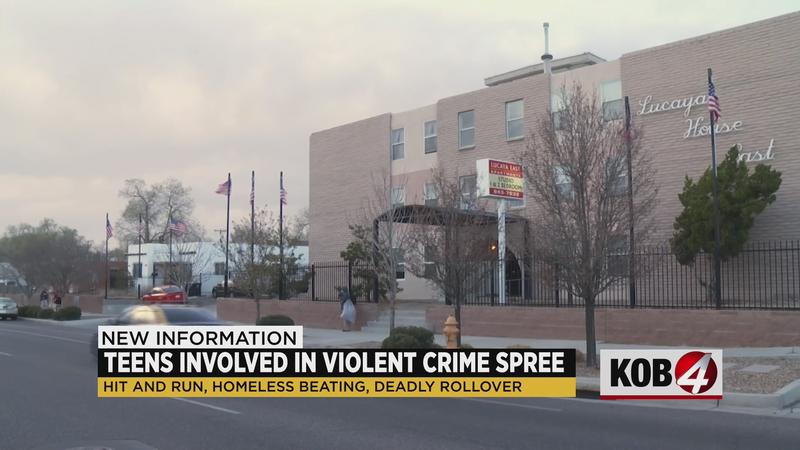 Around 3:00 a.m., officials said officers responded to a single-vehicle crash. Upon arrivals, officers found the single vehicle had rolled over, trapping multiple people inside. AFR was dispatched and was able to extricate all trapped individuals.

According to APD, all nine people were inside a single vehicle. One male and one female were pronounced dead on scene, with the remaining seven passengers transported to different hospitals. At this time, five are listed in critical condition and two sustained minor injuries.

An investigation by Motor Officers found the vehicle was traveling on northbound on University at a high rate of speed. As the vehicle approached the eastbound I-40 Frontage Road, the driver lost control due to the speed of the vehicle and the vehicle began to travel sideways. The vehicle then rolled and impacted the concrete pillar of the interstate.

It was determined that alcohol, speed and the number of people inside of the vehicle were all factors causing the crash.

KOB 4 reached out to police to see if any of the survivors are facing charges at this point, a spokesperson said they don’t know what charges they’ll face at this point, but they did say the driver of the car survived the crash and is in critical condition.