The first red flag was earlier this year. In April, Albuquerque Public Schools Superintendent Scott Elder submitted a letter to the state’s attorney general – notifying him of suspected violations.

Nearly a month later, Rep. Sheryl Williams Stapleton, the coordinator of Career and Technical Education at APS, gave the district’s school board a presentation on how an allegedly bogus "Robotics" company was helping students.

"We have the funding, because I’m going to make sure we get the money," Williams Stapleton said during the presentation. She explained the importance of Cyberquest – an apparent online learning software provided by a company called "Robotics." 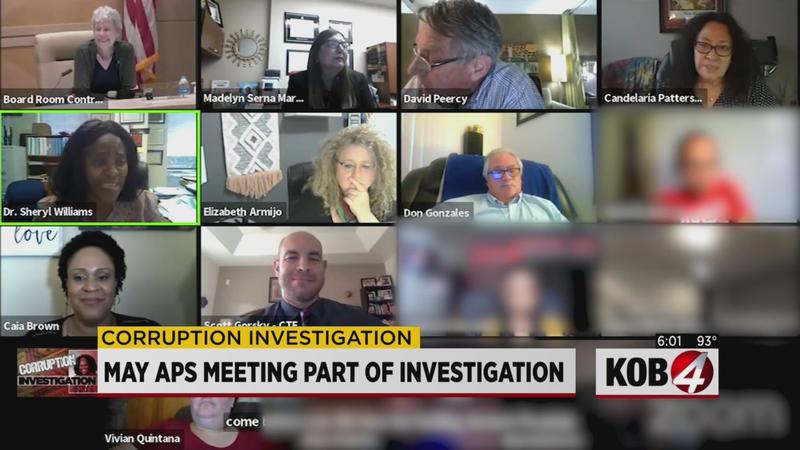 At this point, the state’s attorney general was already investing Williams Stapleton for using her position of power, as a lawmaker and APD administrator, to funnel money through APS to her own interests.

It was not just Williams Stapleton that provided a vote of confidence for the Cyberquest software – that the attorney general later said came from a shell company. Caia Brown, Vivian Quintana, Don Gonzales, Beck Campbell, and seen listed as a sponsor, Ryan Palmer, are all among the eight teachers the district put on leave.

The APS board was apparently unaware of the ongoing corruption investigation, and was instead impressed with the presentation.

The presentation also involved APS middle school students with examples of what they were learning. But the attorney general’s search warrant said under all of that – was a bogus, money-funneling scheme.

An attorney for Williams Stapleton provided the following statement:

"Because of the pending investigations, we are at a disadvantage in being able to publicly comment about any aspect of this matter with great detail. I can tell you that we vehemently disagree with the allegations, and are confident that the true facts, once made public, will reveal that my client is innocent of these allegations. Ms. Stapleton Williams has worked tirelessly to represent her constituency, and the great citizens of this State. She’s done so Honorably. She’s an incredibly helpful person that cares deeply about people. In her role at APS, she continuously strived to insure that students at APS received the academic support they so desperately needed. She stands firmly behind the legitimacy of the Cyberquest software program. The program has delivered positive results for APS students over the years. We remain confident that a fair and impartial investigation will show this. As stated previously, we will supply further details immediately once the circumstances permit us to do so.

Lastly, We are incredibly thankful for the amount of support she has been receiving from friends, colleagues and constituents. We ask that you keep her in your thoughts and prayers, and please don’t rush to any judgment. Let the process play out.”