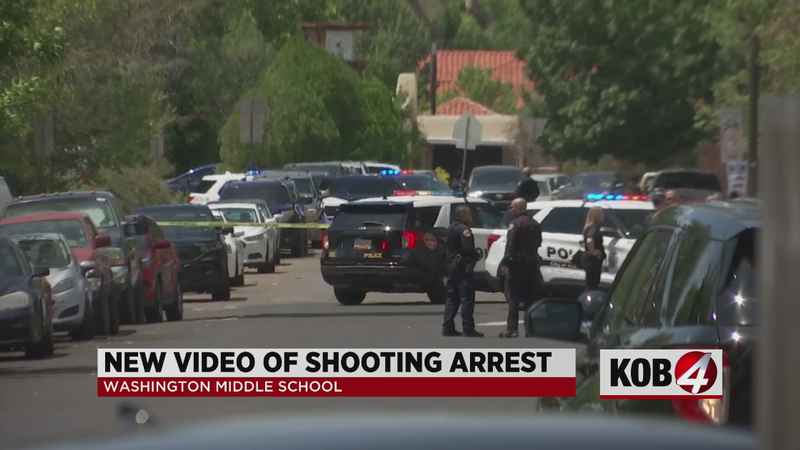 ALBUQUERQUE, N.M. – On Tuesday, APS leaders sent out a notice to parents that the district released lapel video showing the moments after the Washington Middle School shooting in August.

An APS officer heard the shots and discovered 13-year-old Bennie Hargrove on the ground – and the suspect nearby.

KOB 4 made a decision to not air any of the moments that show Hargrove’s death.

The video shows the interaction between the suspect, 13-year-old Juan Saucedo, and an APS school resource officer. The very first people on scene were the APS officer as well as people who appear to be school staff trying to save Hargrove’s life. He was shot multiple times and died from those injuries

On Tuesday, attorneys representing the family of Hargrove released a statement on the release of this video:

"The family of Bennie Hargrove is both sickened and saddened by the video being produced today by Albuquerque Public Schools showing the final minutes of Brave Bennie’s life. This video raises many questions for Bennie’s family, as it seems the shooting could have been prevented. The community is mourning together with Bennie’s family for these horrific actions. Bennie’s family asks that the community respect their mourning and privacy during these rough moments, especially after the production of this horrific video. Bennie’s family will take action to receive justice for Bennie, who had his life wrongfully taken from him."

"We are all still reeling from the fatal campus shooting of eighth-grader Bennie Hargrove that happened three days into the new school year. As a school community, we continue to honor Bennie’s memory while simultaneously trying to regain some sense of normalcy.

We are concerned that our efforts will suffer a setback in the hours and days ahead when the district, obligated by public records laws, provides media with security and police lapel video of the shooting, which we expect will be shown during newscasts, on websites, and possibly on social media. APS doesn’t have a say in how the video is used, what images are shared with the public, how often the video airs, or what is posted.

In anticipation of the release of this disturbing video, we respectfully ask that you consider how watching it may impact your child and family. If your child exhibits any signs of trauma, you have several options available for help. You can reach out to the school counselor or the district counseling office. Another valuable resource is the New Mexico Crisis and Access Line staffed around the clock by licensed therapists. You can call them any time at (855) 662-7474 or visit the New Mexico Crisis Line website.

The safety, health, and well-being of our students and staff are always our priority. School safety is a shared responsibility. It is more important than ever to talk with your students, be aware of their social media activity, listen to their concerns, and access available school wellness resources if needed. We are here for you."