ALBUQUERQUE, N.M.- School sports are back in Albuquerque, and teams are getting ready.

Albuquerque Public School teams can begin practicing as early as Monday and compete as early as the week of March 22 if they choose to, the school district announced Wednesday.

Spring, winter and fall sports teams all get the chance to play and had a deadline of the end of the day Thursday to decide if they want to, according to a school district spokesperson.

It’s hectic, but there’s a lot of optimism.

The Eldorado High School boys basketball team is one of hundreds of APS spring sports teams that have been waiting almost exactly a year for games to return. 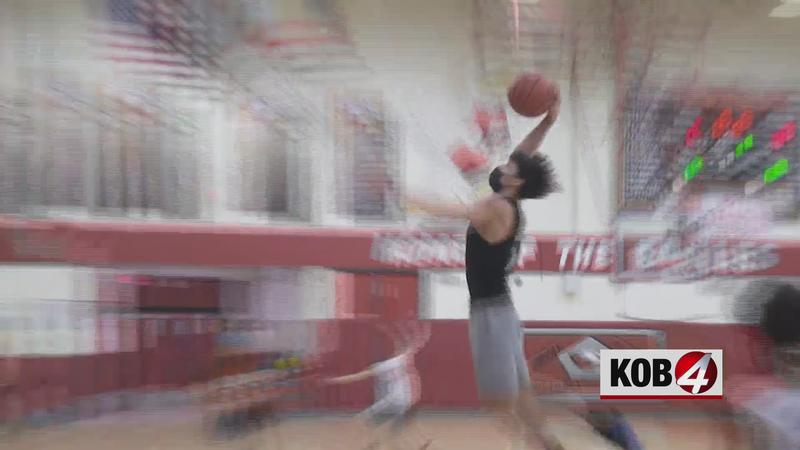 “Just happy to be back, wanting to get in the gym and work. Been waiting all year for this,” senior Devin Domina-Lovato said.

Thursday’s workout shows that the experience isn’t the same. Players were in groups of four, spread out on the court. Games, however, will look mostly normal — though players will wear masks.

“Yeah it’s, finally, nice, after all the wait, it’s good to finally be back,” senior Desmond Morris said. “I think it’s just going to be different than obviously any other season. Playing with the mask on is going to be way different.”

Roy Sanchez is their head coach.

Still, Sanchez is dealing with limitations, for COVID-safety reasons. They’re not practicing defense right now. They will have about half the games as they normally would. They can’t use locker rooms or water fountains — but at least they’re playing.

The upbeat mood was also evident across town at Rio Grande High School, where COVID protocols were throwing a curveball at baseball players Thursday.

The players, still in their cars, stopped one at a time for coaches to check their temperature and ask them COVID screening questions before they had a team meeting on the field Thursday.

“I feel like it’s a great experience again to get back into it,” sophomore Lane Toya said. “I think it’s good for all of us to stay safe.”

They have to keep their distance at all times. The only time they’ll be in the dugouts will be during games and each player will have their own equipment.

Players will even wear batting gloves or rubber gloves on their throwing hand when they’re in the field.

The mood was calm Thursday, but the team was pumped.

“I’m super excited. The kids are excited. This is probably the best remedy that we could have right now for our mental and emotional well-being,” longtime Rio Grande High baseball coach Orlando Griego said.

Scheduling won’t be easy. Baseball teams could play about the same number of games as they would during a normal season, but many athletes will try to play on multiple teams at once. They may even have games with different teams on the same day.

“I have several kids that play basketball, kids that play football, so we’re going to work with all three coaches and do our best to accommodate them because being that they’ve already missed a whole year of athletics, we don’t want them missing out,” Griego said.

Not missing out is what these next few weeks are all about.