Are magic mushrooms legal in New Mexico? Experts weigh in

ALBUQUERQUE, N.M. – What’s the deal with magic mushrooms in New Mexico? Some are saying a 16-year-old court case has already made it legal to grow psychedelic mushrooms. But others say there’s nothing legal about this drug — psilocybin.

This comes as places across the country are debating changing their laws — some have already decriminalized it.

Oregon and a few select cities like Denver and Seattle have either decriminalized or deprioritized psychedelic mushrooms. Just yesterday, Virginia lawmakers proposed legislation to decriminalize the drug.

For the rest of the country, however, it’s still illegal. But a loophole brought forward from a 2005 court case has many people believing that it’s legal to grow these mushrooms at home — a claim KOB 4 is looking into tonight.

Estevan Hernandez, owner and head grower at NM Fungi, has been growing mushrooms for more than a decade.

"I’ve always had a high interest in mycology,” said Hernandez.

Hernandez produces about 80 pounds of mushrooms a week.

From those that come with your food, to mushrooms that don’t look like they’re from this planet.

"As you can see, it sort of again, just this white alien brain looking mushroom."

He started teaching classes on how people can grow their own at home. Not only for food pairings but also the medicinal benefits.

"There is a lot of research being done on Lion’s Mane for its benefit for long term neurodegenerative diseases such as Alzheimer’s and Parkinson,” Hernandez said.

But when you hear medicinal, psilocybin or magic mushrooms as they are called may come to mind. Those who take his class will know how to grow those as well.

"We provide them with all the information they need to grow mushrooms at home and what ever they decide to grow at home is their own business."

Magic mushrooms have an interesting history in New Mexico. While they are illegal in the state, back in 2005 the New Mexico Court of Appeals overturned a conviction of one man who was charged with trafficking psychedelic mushrooms. Which many argue means you can legally grow magic mushrooms in your home for personal use.

"Here in the state of New Mexico it is legal to grow these mushrooms it is legal to possess fresh mushrooms, but once they become dried or they are extracted that’s when we enter the illegal realm."

"I would not feel comfortable based on that 2005 case telling you that growing it is legal,” said Assad.

Saying in the 2005 case, the New Mexico Court of Appeals did reverse the conviction, but it was for drug trafficking, not possession.

"The opinion reflects that growing it, the process under which it’s growing, that timeline, that phase of growing it and helping it grow is not trafficking.”

Which Assad says is a loophole. But at the end of the day, in no way does the court’s ruling change the legality of psychedelic mushrooms.

"I don’t believe to the 2005 case legalized in any way the possession, consumption or distribution of the mushroom itself,” said Assad.

Again, to be clear, the class being held at NM Fungi does not focus on or encourage people to grow psychedelic mushrooms.

Now in the same year New Mexico voted to recreationalize weed, there were no bills in 2021 calling for the decriminalization of psilocybin mushrooms. 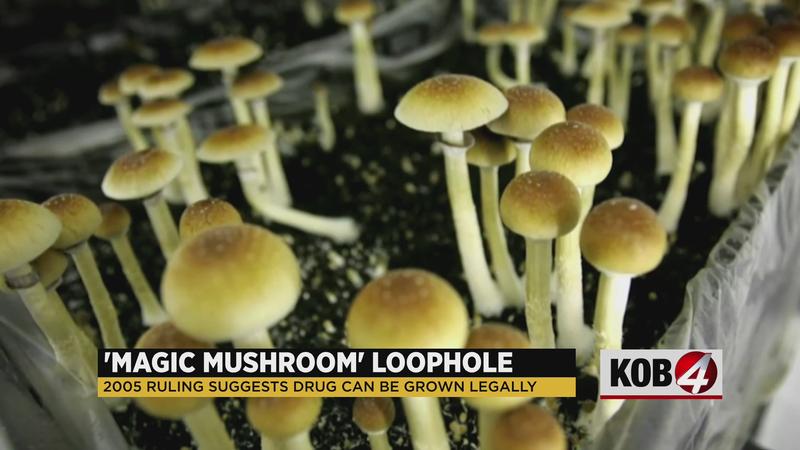